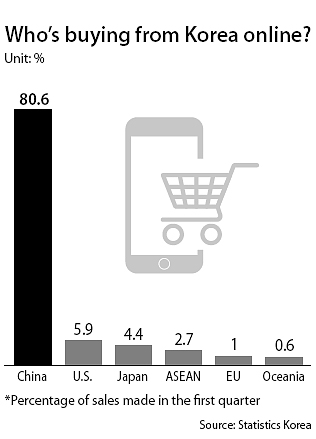 Even though the Chinese government continues to retaliate against the deployment of a U.S. missile defense system here, recent government data showed that the amount of foreigners purchasing goods through Korean online retailers remained high, including from China.

According to Statistics Korea Thursday, foreign purchases from local online retailers rose 50.9 percent year on year to 771.6 billion won ($682 million) in the first quarter and the figure rose 6.2 percent from the previous quarter.

Purchases by Chinese jumped even higher: 59.2 percent year on year to 621.8 billion won. That was a 6.2 percent increase from the previous quarter.

“Chinese accounted for 80.6 percent of the total sales and cosmetics were the most popular products,” said Sohn Eun-rak, a director at Statistics Korea. Purchases made by Americans came in second at 45.8 billion won, followed by Japan at 33.9 billion won and Asean nations at 20.7 billion won.

Foreigners purchased 593.2 billion won worth of cosmetics from local online retailers, up 70.7 percent year on year. Cosmetics accounted for 76.9 percent of total purchases by foreigners. They were followed by fashion related products at 13.3 percent and electronics at 2.4 percent.

Another report by the Korea Trade-Investment Promotion Agency released Thursday said that Korea was fourth biggest exporter of cosmetics goods to the United States. Korean companies trailed French, Canadian and Chinese companies exports of cosmetics to the world’s largest economy.

Online transactions rose 21.3 percent year on year to total 6.33 trillion won in March, the highest number to date. This was the first time in three months for the figure to increase over the previous month.

“It appears that online and mobile shopping transactions are rising, while sales at department stores and discount chains fall, as the number of single households continue to rise in the country,” said an official at the statistics agency.

In the first quarter, U.S-based online retailers were most popular among Korean customers. Koreans bought 537.7 billion won worth of goods through U.S. based online stores, accounting for 57.8 percent of the total. That was followed by the European Union at 125.7 billion won and China at 47.3 billion won.