Celebrities hit the polls and get out the vote

Celebrities hit the polls and get out the vote 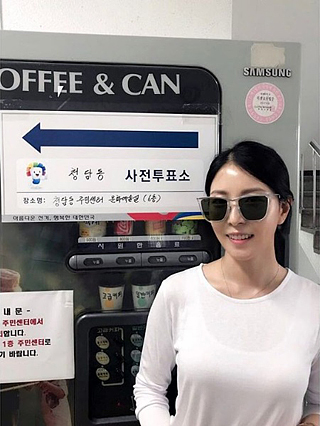 With early voting for the presidential election kicking off yesterday many top celebrities uploaded selfies showing themselves at the polls and encouraging others to vote as well.

Many celebrities urged their followers to vote early and stressed that voting in the presidential election is vital.

At a polling place in Cheongdam-dong, home to many entertainment agencies and celebrities, singers BoA, Jung Chae-yeon, and members of idol groups Got7 and Dayday all cast their votes.

BoA also took to her Instagram account, saying, “I cast my vote today because I will not be in Korea on Election Day. It was very easy and only took about five minutes. Go vote!”

Actor Lee Si-young also uploaded a photo to her Instagram account, saying, “Early voting starts today, please vote for the future of our country. You only need to bring your identification card.”

Kim Ji-hoon who also cast his vote, said “When you can vote for the president on either Election Day or the early voting days, you don’t deserve to call yourself a Korea national if you don’t vote. It also means you have no right to criticize the next president’s actions.”