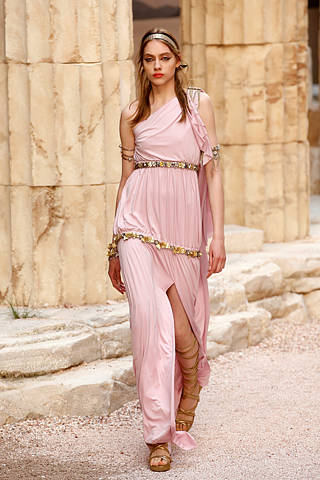 A model presents a creation by German designer Karl Lagerfeld as part of his 2017/2018 Cruise collection show for French fashion house Chanel in Paris on May 3, 2017. [AP/YONHAP]

While Gucci will go to Florence, Louis Vuitton to Kyoto, and Dior to Los Angeles to show off their cruise fashions- Lagerfeld chose to host the normally itinerant mid-season collection in Chanel’s terra mater.

Lagerfeld, a larger-than-life fashion showman who is rarely upstaged, opted instead to bring the wonders of the ancient world to Paris’ Grand Palais.

Celebrity guests who included Keira Knightley, Isabelle Huppert and filmmaker Pedro Almodovar gazed in awe at the backdrop that recreated ruins from the Parthenon in Athens and the famed Temple of Poseidon on Cape Sounion stone for stone, column for column.

Pebbles, marble stones and sand decorated the runway alongside a real olive tree, while shrubs and mountain flowers peeked out from between the rocks by which the Grecian goddess-styled models walked during the 15-minute presentation.

“Reality is of no interest to me. I use what I like. My Greece is an idea,” Lagerfeld said of the display.

If Greece invented drama, Lagerfeld is perhaps a fitting heir.

The over-the-top decor contrasted with some very subtle and accomplished fashion designs.

A clay-colored dress - with a roll under the bust and tight midriff - evoked the silhouette of the curved Greek amphora vase.

“The criteria of beauty in ancient, then classical, Greece still hold true. There have never been more beautiful representations of women. Or more beautiful columns,” Lagerfeld said.

Cruise or resort collections - mid-season shows presented by only a handful of the world’s fashion power houses - were conceived to target wealthy women who traveled on cruise ships in winter.