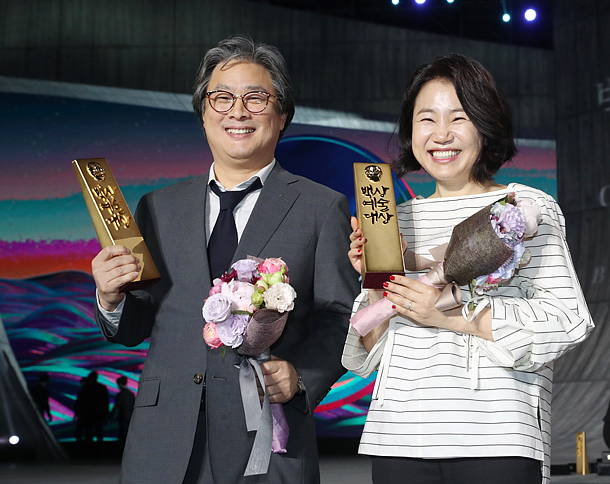 Director Park Chan-wook of “The Handmaiden” and scriptwriter Kim Eun-sook of “Guardian: The Lonely and Great God” each won the Grand Prize at the Baeksang Arts Awards. [JOONGANG ILBO]

The winners at the Baeksang Arts Awards, the only awards in Korea that honors professionals make contents for both TV and movies, always make a big splash, and this year was no different.

Director Park Chan-wook earned the grand prize Wednesday with his thriller “The Handmaiden” at the ceremony held a COEX in southern Seoul.

In television, the grand prize went to scriptwriter Kim Eun-sook, who wrote the hit drama “Guardian: The Lonely and Great God.” It is the first time in 31 years for a scriptwriter to win the highest honor, which is usually given to either actors or directors. The victory came after her work “Descendants of the Sun” won last year.

“It feels like this heavy award might make me really small, but I will try to bear that weight and continue to write zealously,” said Kim.

Her 2004 drama “Lovers in Paris” was also given the award and her 2011 drama “Secret Garden” saw its male lead, Hyun Bin, win the trophy. The Awards gives out its highest honor to either a person who contributed or the creative work itself.

The Baeksang Arts Awards, which started in 1965, reviewed works released in the past year. There are nine different categories in the movie section including the Grand Prize, Best Director, Best New Director, and Best Actor and Actress. The TV section has eight different categories including the Grand Prize, as well as Best Director, Best Scriptwriter, and Best Actor and Actress.

The ceremony was broadcast live on JTBC and JTBC2 and online through Daum, Kakao TV and others.

Perhaps the biggest winner of the night was cable channel tvN, which only launched 11 years ago.

Left: The four winners for Best Actor and Actress for TV and Movie pose together. From left: Song Kang-ho, Son Ye-jin, Seo Hyun-jin and Gong Yoo. Right: Hong Jeong-do, CEO of the JoongAng Ilbo and JTBC, left, and director Lee Joon-ik take the stage to announce the winner of the movie Grand Prize. [JOONGANG ILBO]

The network’s drama “Dear My Friends,” which depicts romance between the elderly won the award for Best Show and Best Script. Actor Gong Yoo was named Best Actor for his role in the channel’s “Guardian: The Lonely and Great God” and Seo Hyun-jin won Best Actress for her role in the channel’s series “Another Miss Oh.”

“The whole time was enjoyable because I was with you,” said Gong in his speech, reciting a line from the drama directly.

The movie awards were spread among a number of films. Actor Song Kang-ho was named Best Actor for his role in “The Age of Shadows” and Son Ye-jin won Best Actress for her role in “The Last Princess.”

The two veteran actors mentioned the dreams of aspiring actors in their acceptance speeches, after a song was performed at the ceremony by 33 actors who played small roles in films released over the last year.

“There are scenes that featured many actors but were cut and some of the actors didn’t get to be shown in the movie at all,” said Song. “I want to give today’s honor to all of them.”

Son also said she felt her emotional when she saw so many out there dreaming about becoming an actor, and won’t remain comfortable where she is and continue to work hard to be better.

Since the presidential election is coming up, some of the winners could not resist making political comments as well, including director Park Chan-wook, who spoke out in support of the LGBT community after accepting his award for his film that feature lesbian characters.

“Since I won the prize with this particular work, I want to tell people to think once more before they vote about how they can help make a society without any prejudice due to gender, sexual orientation and sexual preference,” Park said.