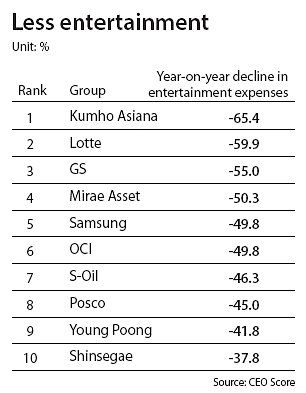 The 30 biggest business groups in Korea reduced entertainment expenses by almost 30 percent in the fourth quarter of last year after an anti-graft law took effect in September, according to CEO Score, a website that monitors activities of Korea Inc.

The Improper Solicitation and Graft Act, also known as the Kim Young-ran Act after its initial sponsor, prohibits public officials, teachers and journalists from receiving costly gifts, meals and congratulatory or condolence payments, possibly in return for offering favors to the giver.

Although the law does not directly affect corporations, many are following its strictures to avoid legal trouble.

CEO Score studied disclosures from 111 companies in Korea’s top 30 business groups. Combined, the companies spent a total of 21.3 billion won ($18.79) on entertainment in the fourth quarter of last year, down 28.1 percent compared to the previous year. In concrete figures, the reduction exceeded 8.3 billion won in total.

In the same period, the companies’ sales rose 2.3 percent year on year and operating profit rose 48 percent. Some commentaries about the anti-graft law said that companies’ profits could be hurt by it. Although entertainment is an expense, they argued, it leads to profitable business relationships.

Among the top 30 groups, 24 were confirmed to have reduced entertainment costs in the fourth quarter. Four groups did not share disclosures on entertainment costs. The two groups that spent more than the previous year were KT and Hyundai Motor Group, whose expenditures rose 5.3 percent and 2.1 percent respectively year-on-year.

The biggest saver among the 30 groups was Kumho Asiana, which reduced entertainment expenses 65.4 percent year on year. Lotte followed with 59.9 percent and GS which saved 55 percent.

Samsung also saved big, reducing its expenses 49.8 percent year on year. Other giants at the top of the list were Posco (45 percent), Shinsegae (37.8 percent) and LG (30.7 percent).