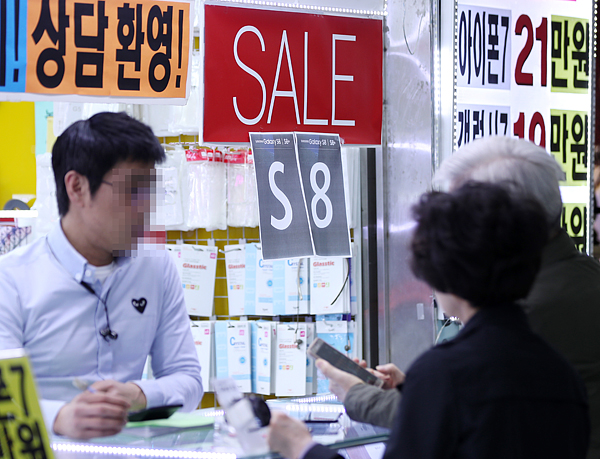 A prospective buyer talks to a clerk at a smartphone store in southern Seoul on April 20. Phone stores scrambled to provide illegal discounts on Galaxy S8s over the past several days, taking advantage of the government’s lax surveillance during the holiday week. [YONHAP]

Thanks to the promotion, new smartphone subscriptions, including movement between carriers, were 28,627 on Wednesday alone, which exceeds 24,000, the amount the watchdog Korea Communications Commission (KCC) has set as an indication of overheated competition among the country’s three mobile carriers.

A Galaxy S8 with 64 gigabytes of storage carries a retail price of 935,000 won and legally-binding subsidies, which vary according to telecom operators, were 158,000 won for LG U+ on a monthly plan of 60,000 won, for example.

Legally, smartphone sellers are allowed to provide up to 15 percent in additional subsidies, meaning the price of the phone can only be reduced 23,700 won to carry a final price tag of 753,000 won. The government has capped subsidies to prevent cut-throat competition among the telecom companies but illegal subsides have been a chronic headache for the watchdog. Some stores, including those operating online, provided discounts of 500,000 to 600,000 won, with subsidies.

This resulted in a hard-to-believe price of less than 200,000 won. The sellers - mostly congregated in the same building, such as Techno Mart in northeastern Seoul - leaked information of illegal subsidies over mobile messenger and social networks sporadically, sparking what has been dubbed “golden holidays” that stretch from Labor Day on Monday to the presidential election next Tuesday. The telecom operators are offering the discounts as they struggle to attract as many subscribers as possible.

After Samsung unveiled the S8 and its bigger sibling S8+ on April 21, the KCC monitored illegal subsidies but they ended on April 30 at the start of the holidays. Worsening the situation is the fact that KCC Chairman Choi Sung-joon’s three-year term ended last month and the seat remains absent. The post is expected to be filled in after the new president is inaugurated.

“When a certain carrier comes up with a hefty amount of subsidies, others have no choice but to follow suit not to lose their existing subscribers,” said a telecom analyst, indicating carriers are waging a chicken and egg game.

A KCC spokesman said on Thursday that the watchdog has called on all three telecom operators to investigate and would launch a probe should illegal subsidies persist.

Meanwhile, Samsung reclaimed its position as the world’s No. 1 smartphone producer from Apple during the first three months of this year despite the discontinuation of the inflammable Galaxy Note7, market researcher Strategy Analytics said Thursday. Samsung smartphone’s shipments worldwide totaled 80.2 million in the first quarter, up 2 percent from the same period a year earlier. In the fourth quarter, Apple outpaced Samsung.