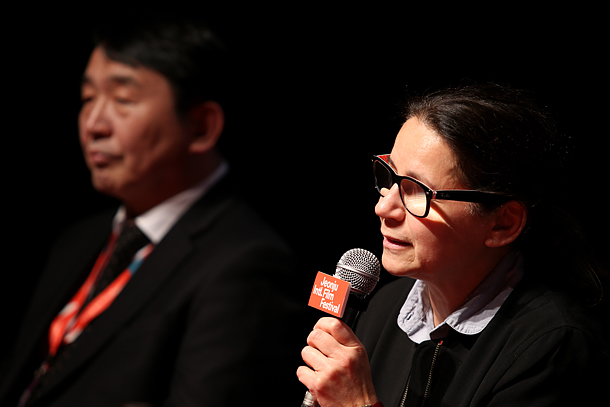 JEONJU, North Jeolla - The words “I’ll see you in my dreams” get a strange and affecting new spin in Ildiko Enyedi’s romantic dramedy “On Body and Soul.” The unusual love tale between two introverted people working at a slaughterhouse is the Hungarian director’s first feature film in 18 years since her last, “Simon the Magician” (1999).

The movie, which opened the 18th Jeonju International Film Festival (JIFF) on April 20 and won the Golden Bear at the Berlin Film Festival in February, kicks off with a doe and a buck rubbing against each other in the empty, snow-covered forest, which later turn out to be a recurring dream shared by the male and female protagonists, Endre (Geza Morcsanyi) and Maria (Alexandra Borbely).

At the center of the film is a human relationship, according to Enyedi, who first gained international recognition through her 1989 estranged-twins drama “My 20th Century” that earned her the Camera d’Or at Cannes Film Festival.

“I wanted to show two people connect. It could have been friendship or anything [else]. But [I knew that] the strongest way to show two people is the loving relationship,” Enyedi, who visited Korea for the first time to attend JIFF, told Korea JoongAng Daily during an interview at a cafe in the southwestern city on Sunday.

“On Body and Soul” revolves around Endre, the slaughterhouse’s mild-mannered financial director with a crippled arm, and Maria, OCD-afflicted new quality inspector who has deep-rooted trouble connecting with others.

Endre is instantly drawn to the evasive, enigmatic newcomer, who continues to rebuff his tentative advances in a cold panic until she realizes through a company psychiatrist that the two experience the exact same dream, in which the pair each interact as a doe and a buck.

The two initially are not sure whether they should make advances in their relationship in real life or to politely remain solitary strangers while turning into dream lovers at night. Though the pair secretly wishes to open up and follow their instincts, the two, both of whom have defects, are too afraid to risk the chance of looking ridiculous and being laughed at by revealing their inner feelings.

Through the overly careful protagonists, Enyedi not only hoped to deliver a love story with a down-to-earth tone, but also attempted to reveal how she thinks people should live.

“This film is not just a love story. It is mostly about how to live our life. It’s about whether we are willing to live our lives, risk and open ourselves completely to another person. For me, this aspect was very important.” Enyedi, who described life as “an extreme sport,” explained that this was the core message of the movie.

The message is metaphorically delivered through the comparison of the cattle and deer.

“At the beginning, both characters look for safety and stability, which is very similar to the life of cattle [in the slaughterhouse] that has a roof [to protect them from danger], and are fed every day in the limited space,” said Enyedi.

“The most heartbreaking event for the cows in the slaughterhouse is not the killing but having to spend one last day [there] without being able to do anything. [On the other hand], deer live outside in cold without food and risk being shot by hunter. But they live a full life.”

According to the director, the act of Endre and Maria risking getting hurt by stepping outside of their limited space is “worthwhile.” She added, “[Without stepping out of your limited space], you may be successful, manage and resolve your life, but you can miss [the very meaning of] your life.”

When asked whether she will be able to create a new feature film sooner than her last 18-year gap, Enyedi said that she already has two scripts ready, which are titled “Story of My Vibe” and “Silent Friend.”

While the former is a love story revolving around a sea captain set against the backdrop of the world, including Shanghai, in the ‘20s, the latter will be a German movie, in which the main protagonist is a tree that sees humans with very benevolent and sharp eyes for longer than a century.

Meanwhile, JIFF will wrap up its 10-day journey on Saturday.