Stars come out for a meeting with Moon

Stars come out for a meeting with Moon 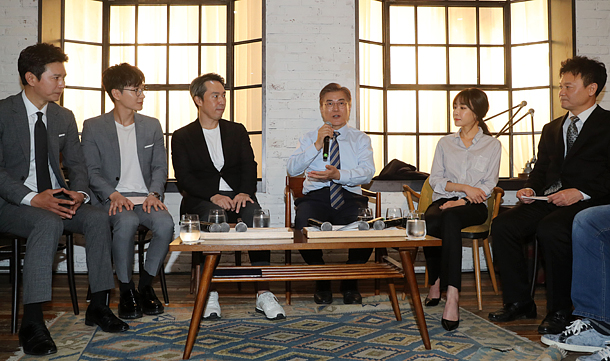 Democratic Party candidate Moon Jae-in speaks during a meeting with entertainment industry officials and celebrities represented by the SM Entertainment agency on Thursday at SM Town at COEXArtium in southern Seoul. [YONHAP]

Frontrunner Moon Jae-in of the Democratic Party (DP) on Thursday had a star-studded meeting with entertainment agency officials and their celebrity talent at SM Town at Coex Artium in southern Seoul.

It was a rare event because entertainment agencies avoid politics assiduously in the fear of possible retribution by parties and politicians they haven’t supported when they gain power. The DP nominee was flanked by former teen pop star Kim Min-jong, Lee Teuk, a member of the boy band Super Junior, SM Entertainment CEO Kim Young-min and renowned songwriter Kim Ea-na at the studio run by SM Entertainment. The event was packed with reporters.

The meeting’s theme was the need to further promote the so-called wave of Korean pop culture, known as Hallyu, across the world. The big surprise was that SM Entertainment, one of Korea’s biggest entertainment agencies - representing groups such as Girls’ Generation, Super Junior and EXO - offered its studio for the event venue and sent its CEO to meet with Moon, who leads in all polls with nearly a 20-percent gap and the May 9 election just days away.

At the beginning of the meeting, Moon acknowledged difficulties the K-pop industry is facing because of China’s virtual ban on K-pop concerts and broadcasting of Korean dramas and movies following Korea’s decision to deploy a U.S.-operated antimissile defense system last year.

“China is such an important, big marketplace for Hallyu,” Moon said. “I know many are experiencing difficulty because of the Thaad,” an acronym for Terminal High-Altitude Area Defense.

He said the government should provide systematic assistance for the industry to overcome the challenge and reach to help it expand in other parts of the world. Actor Kim Min-jong asked Moon to improve conditions for production staff who often work without legal contracts. “I ask you to provide assistance to these staff members in dire working conditions so that a fair production process can be put into place,” said the actor.

Moon acknowledged a huge gap in working conditions between famous celebrities and lower level employees. “Though we have a law on welfare for artists, there are many shortcomings as it is nascent,” said Moon.

While the Thursday meeting was not a formal endorsement of Moon by SM Entertainment, it underscored celebrities’ support rooting for two liberal candidates: Moon and the minor Justice Party’s Sim Sang-jeung. The two conservative candidates - Hong Joon-pyo of the Liberty Korea Party and Bareun Party nominee Yoo Seong-min - have received no such backing by entertainment figures.

For Moon, more than 200 celebrities, including singer Lee Seung-hwan, Kang San-e, songwriter Kim Hyeong-seok and novelist Gong Ji-young have given endorsements. Sim has been endorsed by Park Chan-wook, the director of the film “Oldboy” (2013).

The lack of celebrity support for Hong and Yoo is understandable in light of the fact that the conservative Park Geun-hye government allegedly drew up a blacklist of over 9,000 artists considered critical of her administration and actively tried to harm their careers.

The blacklist is said to have been drawn up just a month after the sinking of the Sewol ferry on April 16, 2014, which killed 304 passengers, according to testimonies of former cultural ministry officials in court. A number of artists criticized Park’s handling of the disaster.

In the 2012 election, singers and actors including Park Sang-won, Seol Won-do and Hyoun Mee joined rallies for candidate Park Geun-hye.