Where did the ‘Alien’ come from?: ‘Alien: Covenant’ is third film in franchise directed by Ridley Scott

Where did the ‘Alien’ come from?: ‘Alien: Covenant’ is third film in franchise directed by Ridley Scott

A new chapter in the durable “Alien” franchise hits theaters next week. It is a follow-up to “Prometheus” (2012), which was a rebooting of the franchise set in a period before the original “Alien,” which was released in 1979.

The upcoming “Alien: Covenant” is the third film in the series directed by Ridley Scott. He did the first film - a pioneer science fiction and horror movie - and also “Prometheus.”

Starring Michael Fassbender (“12 Years a Slave”) and Katherine Waterston (“Fantastic Beasts and Where to Find Them”), the main question in the newest installment is, “Where did the alien come from?”

After the first “Alien,” there were a lot of questions that should have been asked - but weren’t - in the second, third and fourth sequels, all of which starred Sigourney Weaver as Ripley, director Scott said Thursday at a press conference with Korean reporters. Fassbender and Waterston joined him. 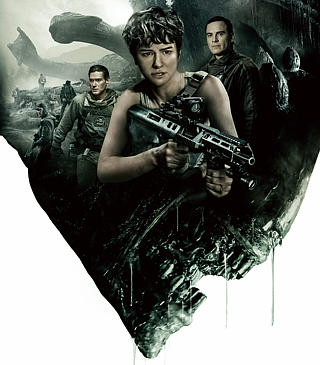 “The questions were, ‘What was the ship?’ ‘Who was the space jockey [the outsized, fossilized human-like creature at the start of the original film]?’ and ‘What was the eggs for, who made them and why?’ Nobody asked the questions. It was amazing that didn’t happen. So ‘Prometheus’ kicked it off and ‘Covenant’ is in the line of asking those questions,” the director explained.

Describing the casting of his new heroine, Scott said that Waterston was a natural choice.

“She’s beautiful, smart, intelligent, a terrific actress and etc.,” Scott said. “I always go for the best person and I think she suited the role very well to follow in the steps of Sigourney [Weaver]. I didn’t want to change that plan. I thought the original plan of having a female protagonist was a good one, and therefore, we stuck with that.”

The upcoming film revolves around the crew of the ship Covenant, bound for a remote planet on the far side of the galaxy. On their way, they discover what they think is an uncharted paradise, which actually turns out to be a dark and dangerous world full of threats. In the upcoming movie, Katherine plays a terraforming expert, someone who uses technology to make uninhabitable planets habitable.

Though Fassbender plays two different androids with different personalities - David and Walter - he said it was not too challenging for him to pull off those roles.

“It wasn’t that challenging [to play the characters]. I discovered the character [David] in ‘Prometheus.’ It was just about finding [a new, updated droid] Walter and finding a voice for him,” said Fassbender.

Waterston, who shows a completely different side from what audiences saw in “Fantastic Beasts and Where to Find Them,” talked about her action scenes.

“I obviously wanted to get strong enough not to hurt myself while carrying guns,” she told Korean reporters. “But because my character isn’t a soldier but a member of this scientific team, I didn’t want to look like I was going to be the obvious heroine of this story. I thought it might be more interesting if she turned out to have good instincts and be able to fight back,” said Waterston.

Even before the newest installment hit theaters, Scott said that the script for the next movie in the franchise is already being written. One of the greatest advantages in making sci-fi films, said Scott, also known for “Blade Runner” and “The Martian,” is that “anything goes.”

“Covenant” will be released nationwide on Tuesday. It runs 122 minutes, and is rated 15 and older.