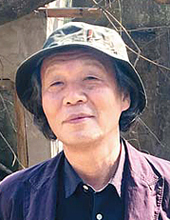 The small island of Sorok, southwest of Goheung, South Jeolla, which used to confine thousands of leprosy patients within its borders, is now where real estate developers are planning to create a summer vacation spot.

There is one man who is going against the tide, a 73-year-old architect and professor at Sungkyunkwan University named Jo Seong-ryong.

“Tourism agencies and real estate developers have started renovating the island and they’ve opened up a resort by a beach, too,” Jo said. “This island is a historical monument. I will not just stand by and let developers bulldoze parts of it into tourism sites.”

Leprosy patients have been living on the island for over a century. A hospital was built on the island in 1916 to house them, during the Japanese occupation of Korea (1910-1945). Some were kept in confinement or forced into labor during this period.

There are now some 520 patients on the island. Given that their average age is 74, experts say there may no longer be any patients left on Sorok by 2040.

Jo has been visiting the island for the past five years, with a plan to preserve some sites as historical monuments.

Last year, he took a house at the entrance of the island, where a leprosy patient lived in the 1970s and which can be reached from Goheung County by Sorok Bridge, and turned it into an information center.

The center is furnished with poems by Han Ha-un (1920-75), who suffered from leprosy, and old maps of the island.

“The island is attractive to the eyes of an architect because the houses built by leprosy patients show its history,” he said. “When I first came to this island, many of these houses left behind by patients were hidden among bushes and trees. Now that I have looked through them one by one, I know that each house shows a great deal of history about how the people built them with care, brick by brick.”

Jo said the works of his preservation team will be celebrated on the 101st anniversary of the establishment of the Sorokdo National Hospital, the first hospital for leprosy patients that opened on the island on May 17, 1916. The team has been renovating some abandoned houses once used by leprosy patients for five months.

“We’ve left each house as it is, only renovating parts that were at risk of crumbling down, by using steel pipes to prop them up,” said Kim Kyeong-wan, a research director of the Sungkyun Architecture Institute, a non-profit organization affiliated with the Sungkyunkwan University.

Jo, who has taken part in urban renovation projects like the transformation of a water purification plant into Seonyudo Park in western Seoul, said the island will be turned into a museum.

“Sorok Island will be renovated in a way that all the history of its community will be preserved,” he said. “The buildings of this island stand as memories of the struggles and history of the patients. The island will be a 21st-century museum for all.”