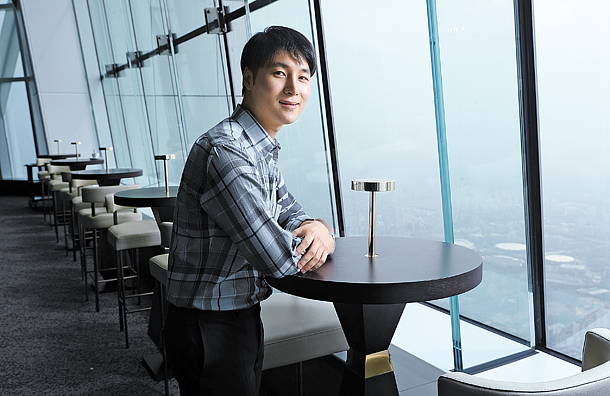 Yang Teo sits on the 123rd floor of the Lotte World Tower, which he designed, enjoying the view of Seoul. [JEON MIN-KYU]

The 123rd floor of the Lotte World Tower, the tallest building in Korea, has dark marble floors, brass walls, golden lighting, Korean-style window frames and a view from 550 meters above the ground. This fusion of modern and traditional Korean interior style was accomplished by Yang Teo.

“Designing the 123rd floor of this building was like a putting the cherry on a cake,” he said. “It was hard work, but I am so proud of it.”

Yang studied interior design in the United States and worked at the studio of renowned Dutch designer Marcel Wander. After returning to Korea in 2009, he took on high-profile design projects, including the Busan Paradise Hotel Bridal Lounge and the renovation of the Manghyang rest stop on the Gyeongbu Expressway.

He is famous for using Korean elements or motifs. This is why Lotte chose Yang to design the most important floor of the tower, its top floor.

“Lotte asked me to design the top floor as a modern interpretation of the traditional architectural styles of Korea,” Yang said. “The meeting itself was held in my house, which was built in the traditional hanok style.”

The windows of the 123rd floor of the Lotte World Tower, also called the Seoul Sky Premium Lounge, were designed to represent the curves of Korean ceramics and traditional writing brushes, Yang said.

“Straight lines are emphasized in the windows, which represent the windows of hanok-style houses, and the windows are designed to create soft, rounded shadows,” he said. “The furniture in the lounge is designed to represent simple lines and curves, too.”

Yang recently collaborated with Savoir, a premium British bed company that is popular with royal families in Europe. In that collaboration, he designed the headboard of a bed with curves meant to represent the full moon, an important factor in many traditional celebrations here like the Jeongwol Daeboreum festival, which celebrates the first full moon of the year. The bed was named one of the top 10 designs in London Design Week in 2017.

Yang also makes an effort to include some aspects of the Korean traditions in his projects. He designed the VIP reception room of the Korean Cultural Center in Beijing as a tea room, and guests are welcomed by being offered tea - a tradition Yang said is quite Korean and different from the Japanese or Chinese traditions, in which the focus is on reaching peace of mind or being artful in the act of serving tea.

“Korean furniture and interior accessories like the traditional chests go well with any types of interior designs,” he said. “Don’t be afraid to try them out.”