11 million go to polls in two days of early voting

11 million go to polls in two days of early voting 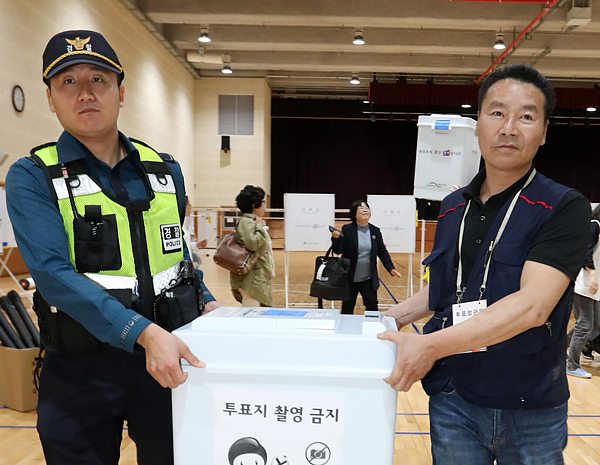 After early voting for the May 9 presidential election came to a close Friday evening, police supervise the transfer of ballots from a polling center in Dodam-dong, Sejong. [YONHAP]

Some 11 million voters took advantage of two days of early voting, a record number suggesting a high level of enthusiasm among the public to elect a new leader to replace the disgraced former president.

Over 11 million, or 26 percent of 42.4 million eligible voters nationwide, cast votes on Thursday and Friday in advance of election day next Tuesday, setting a new record since early voting was introduced in 2014.

Early voting was available at polling stating on Thursday and Friday from 6 a.m. to 6 p.m. each.

Sejong had the highest early voting turnout of 34.4 percent. South Jeolla saw the second highest, with 34 percent, followed by Gwangju with 33.6 percent. Considering that the Jeolla region is a traditional stronghold of the Democratic Party, a high turnout there is a positive indicator for DP nominee Moon Jae-in, who leads in all polls by a large margin.

Early voter turnouts in Daegu and North Gyeongsang, the most loyal support bases for the conservative Liberty Korea Party, lagged behind with 22.2 and 27.2 percent.

The National Election Commission set up 3,507 voting booths around the country to receive ballots, including at Incheon International Airport. No pre-registration was required. Voters were only required to bring in government-issued identification cards such as passports or driver’s licenses and were able to cast ballots outside their registered districts.

Complaints erupted that only one early voting booth was set up at Incheon International Airport. Many Koreans traveled this week because of a number of holidays.

“Though I have generally tried to vote in past elections, this time I felt I must exercise my right because of what this country has gone through over the past half year,” said Yoon Hee-sang, a 25-year-old student who cast a ballot at a voting booth at a Yeouido community center in western Seoul. He was referring to the impeachment and removal of President Park Geun-hye and the months of street protests demanding she resign.

Many young voters were seen taking selfies with voting booths behind them in a cheerful mood. More than 200,000 hashtags of “Voted” in Korean showing voters with stamp signs on their hands were posted on Instagram as of Friday.

The turnout is perceived as showing the public’s optimism in electing a better president than Park, who is behind bars awaiting trial on 13 counts of bribery and abuse of power.

Analysts say the early voting could be a barometer of the final turnout in the snap election to be held Tuesday, which could reach as high as 80-percent.

While it remains to be seen which candidate will benefit from a high turnout, Lee Jung-hee, a professor of political science at Hankuk University of Foreign Studies, noted such high numbers “demonstrate the public’s high demand for a change of power.”

“As it has been shown that younger voters have expressed strong intentions to vote this year (according to polls), that may work in favor of Moon, who has been championing a change in power all along on the stump. The fact that voters were able to partake in early voting outside of their districts also helped boost the numbers.”