Guy who got vulgar with candidate’s daughter questioned by police

Guy who got vulgar with candidate’s daughter questioned by police 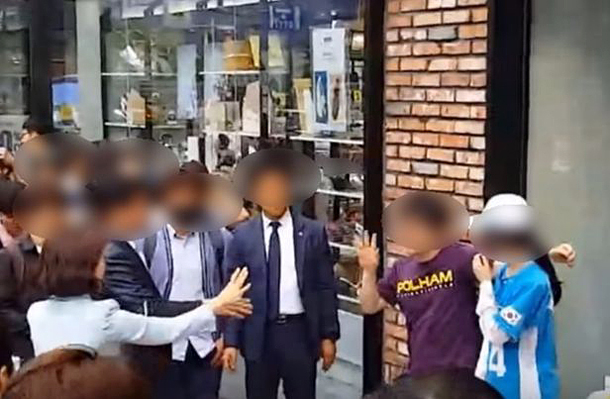 A man changes his pose after sticking out his tongue at Yoo Dam, daughter of Bareun Party nominee Yoo Seong-min, near Hongik University in Seoul on Thursday. The man extended his tongue out as if he was trying to lick Yoo’s face with his arm around her neck. [Screen capture from YouTube]

A 30-year-old man accused of taking a vulgar picture with Yoo Dam, daughter of Bareun Party candidate Yoo Seong-min, was brought into a police station for questioning Friday after photos of the incident went viral online.

The man, who was identified by the surname Lee, was taken to the Seoul Mapo District police precinct and questioned.

Yoo, who has become an overnight celebrity during the campaign because of her good looks, was campaigning for her father Thursday near Hongik University in Seoul. People lined up to have their photos taken with her and Lee was one of them. When it was his turn, he put his arm around Yoo’s neck and extended his tongue as if he was about to lick Yoo’s face.

Security guards were present but did nothing to suppress Lee. Bareun Party officials told him he should not make the vulgar gesture, according to a video clip posted on YouTube. Lee complied and proceeded to take another photo of Yoo. He walked away undisturbed.
Lee is also accused of posting a picture of his vulgar gesture online. Pictures and the video clip of the incident became a viral sensation, leading to calls for his arrest for assault.

Rep. Ha Tae-keung of the Bareun Party, a Yoo campaign aide, said on Facebook that the suspect is a member of the far-right online site Ilbe, which is notorious for homophobic and misogynic content.

It took less than 24 hours for the police to track down Lee. Police are investigating his motive and whether he posted pictures online.
The 22-year-old Yoo earned celebrity-like fame in recent weeks for her youthful appearance. The Bareun Party cancelled Yoo’s campaign schedule for Friday.