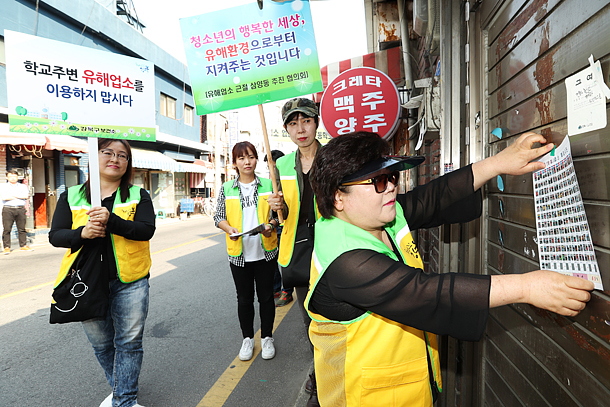 Residents of Gangbuk District, northern Seoul, who are members of a civic committee, are posting a warning on the shutter of a bar on Samyang-ro on Monday and holding up picket signs that read, “Protect our children from unsafe environments." [JANG JIN-YOUNG]

Parents and grandparents of young students have rolled up their sleeves in school zones in northern Seoul’s Gangbuk District, campaigning and tipping off police to bars illegally hiring employees to solicit passersby on the streets. Their two years of effort paid off, as more than 100 bars closed down in the district.

“I would go pick up my granddaughter from her elementary school every day,” said Kim Gong-suk, a Gangbuk resident. “But then we would always have to pass this street filled with about 20 bars, many of which hired women to solicit passersby to come into the bar.”

“I took up the cause to create a safer environment for the kids,” Kim said. “Once I started, more parents joined in.”

A total of 64 parents and grandparents living in Gangbuk created a civic committee in April 2015 to start working in six areas in the district known to be populated by bars and adult entertainment businesses.

They began by posting warnings on the bars near schools not to hire barkers to solicit people on the streets unless the business is licensed as adult entertainment businesses.

Once a month in the evening, members of the civic committee rallied on the streets near the bars. Sometimes more than 200 would take part, Kim said.

“Did you know Mencius’ mother moved three times to find a better environment for her son’s education?” said Jang Soo-kyung, a 52-year-old mother. “I can’t afford to move that many times, but I am participating in this movement to help my children grow up in a better environment.”

The Gangbuk District Office and police also increased their crackdowns. From April 2015, the district office established a team to investigate bars and restaurants that were illegally hiring employees to solicit passersby. The district office joined with local police to raid them twice a week, from 10 p.m. to 1 a.m.

The bars and restaurants that have hired women as barkers without registering as adult entertainment businesses were forced to shut down for a month. If a business was found to have violated the law three times, it was permanently shut down.

Parents and grandparents who have taken up the cause also reported to authorities whenever they suspected illegal barkers at restaurants and bars.

They also held meetings with the owners of buildings renting out spaces to ask them not to renew their contracts with bars and restaurants conducting illegal business practices.

After two years, the number of bars and adult entertainment businesses had shrunk from 170 to 59. Among the 111 businesses that left the area, 63 were shut down for violating the law. Some owners changed their business to nail salons or flower shops.

Five out of 13 areas of the district are completely free of bars and adult entertainment businesses.

“The 59 remaining businesses will also be encouraged to leave the area, because most of the building owners agreed not to extend their contracts,” said Lim Jong-bae, head of the health department of the Gangbuk District Office. “Many of them will leave in the next year or so.”

“Sometimes we get into fights with business owners,” said Kim Myong-gi, vice chairman of the civic committee. “But some of them agree that there is a need to provide a safer environment for the kids near schools.”

“We will be continuing the effort to expel as many as possible illegal businesses in the district,” said Park Gyeom-soo, head of the Gangbuk District Office. “No matter how long it takes, we will continue this work.”