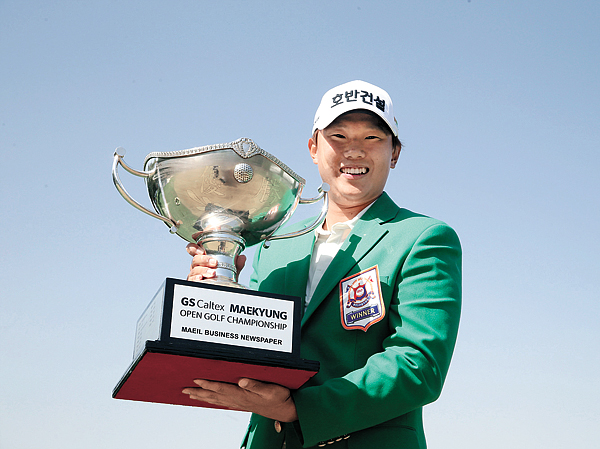 Although Lee started the final round three shots behind the leader, Phachara Khongwtamai, he solely focused on his game in the final group to overcome Khongwtamai’s three shot lead.

Lee got off to an early start in the round, making his first birdie on the second hole. He made bogey on the third but at the par-five fourth hole, Lee made an eagle to save two shots, bringing him to seven-under-par.

The eagle on the fourth hole was just the start of his round, in which he chipped in two shots on the sixth and ninth holes. At the ninth hole, par five, Lee’s second shot came up short of the green but he successfully chipped in from 30 meters to save another two shots to get to eight under par.

At the par-four 16th hole, considered the most difficult hole on the course, Lee chose to tee off as if it were a par 5, using a hybrid. Since he didn’t hit the green in regulation, Lee chipped his third swing onto the green and successfully made a 5-meter putt to make an up-and-down for a par. Getting par on the 16th, Lee’s win became somewhat certain.

On the 17th hole, Lee lost a shot with a bogey, but that didn’t prevent him from winning the tournament as he held a three-shot lead heading into the last hole.

This is Lee’s first win since the 2016 SK Telecom Open, and his second overall KPGA tour major tournament victory. With a win, Lee has now earned a KPGA seed for the next five years and is now ranked first on the 2017 money list.

Although Khongwtamai wasn’t able to set the record in the KPGA tour, he still holds the record as the youngest winner in a professional tour when he won the Sing Hua Hin Open of the ASEAN PGA Tour in July 2013 at age 14.

The defending champion Park Sang-hyun came up short of defending his title, shooting two over par in the final round to finish tied at third. Moon Kyong-jun shot a three under par to finish runner-up at the event.

After a week off, the KPGA tour players will next be playing in the SK Telecom Open 2017 at the Sky 72 Golf Course, where Lee won last year.