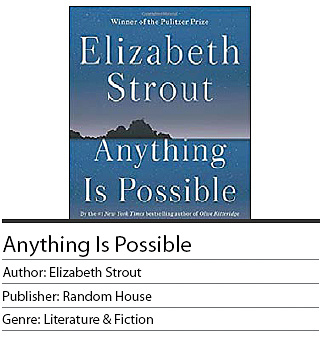 As Pulitzer Prize-winning author Elizabeth Strout was writing “My Name Is Lucy Barton,” she started a companion novel to catch the overflowing stories of the minor characters in Lucy’s life. That was the beginning of the newly published “Anything Is Possible,” where the people Lucy knew during her childhood in the fictional Amgash, Illinois, get a chance to speak their minds about Lucy and tell their own tales.

Readers will remember the Nicely sisters, Mississippi Mary and the teachers, siblings and cousins who appeared sparingly in Lucy Barton’s memories and in the distancing gossip she heard from her mother during an extended hospital stay.

Lucy, a writer who fled Amgash for college and then New York, was trying to make sense of her sad, impoverished childhood and her mother’s inability to say “I love you.” She was also trying to write about it honestly, unsentimentally and without protecting anyone. That was “My Name Is Lucy Barton.”

In “Anything Is Possible,” the Illinois characters have their own novel, a series of linked stories, set mostly in rural towns surrounded by corn and soybean fields. Reminiscent of Strout’s Pulitzer-winning “Olive Kitteridge,” the new work slowly reveals details about Lucy’s life as the characters remember her.

Lucy is on the minds of the hometown crowd because, to their astonishment, she has published a memoir and is famous enough to appear on TV. That’s really something for a girl from a family judged, in the words of one character, as “just trash.”

“The Barton family had been outcasts, even in a town like Amgash, their extreme poverty and strangeness making this so,” Strout writes in “The Sign,” the first of these nine new stories. A former school janitor, now in his 80s, wonders whether he and his wife could have done more for Lucy and her siblings. He visits Lucy’s brother, who lives alone, and the two men tell each other long-kept secrets.

In another story, “Sister,” Lucy herself returns to visit her siblings after a nearly 20-year absence from Amgash. Their parents are long dead. Pete, Lucy’s brother, nervously scrubs floors and buys a rug at Walmart to make his small house presentable. Vicky, Lucy’s sister, puts on lipstick, all the better to spew a cutting remark at their famous sister.

When the reunion unearths suppressed memories, Lucy suffers a panic attack and the three hit the road to get her and her rental car back to Chicago.

Strout creates an unmistakable sense of place in spare, precise prose. In “Olive Kitteridge,” she gave us coastal Maine. Here, she nails the rural Midwest. Characters make long drives through expanses of farmland, sometimes with wind turbines on the horizon “their long white arms twirling in the air all at the same speed but otherwise without synchronicity.”

They are hurt people who sometimes salve each other’s wounds with a little kindness, but mostly remain stoic and disconnected, like the windmills.

For readers of “My Name Is Lucy Barton,” the new novel is a must. It fills in missing pieces about Lucy and her family, which will please those who felt the earlier novel omitted too much.

But there’s no need to read Strout’s earlier work to enjoy “Anything Is Possible.” A generosity of spirit glows within these stories, even as they unwrap themes of parental cruelty, joyless marriages and the legacy of past trauma.