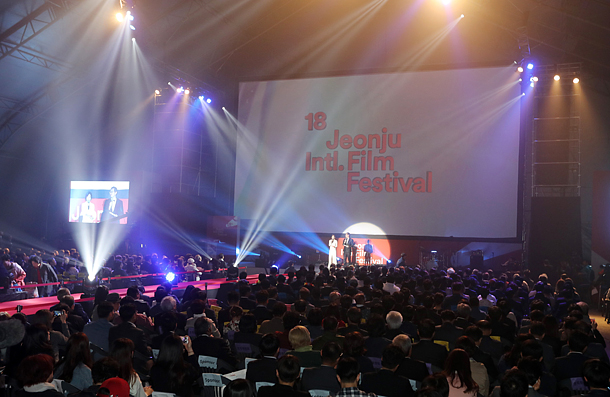 Korea’s largest festival of independent and art films came to a close on Saturday, having set records for attendance and screenings.

The 18th Jeonju International Film Festival (JIFF) wrapped up its 10-day run in the southwestern city of Jeonju, under the slogan, “Outlet for Cinematic Expression.”

The event’s organizers said 270 of 543 screenings sold out for an estimated 79,000 viewers in attendance. All figures were JIFF’s all-time records.

At a closing press conference, Lee Choong-jik, executive director of JIFF, said the long holiday weekend in early May helped with the attendance. With May Day, Buddha’s Birthday (May 3) and Children’s Day (May 5), some Koreans enjoyed up to nine days off including the weekends.

Away from the big screens, the JIFF organizers held exhibitions titled “100 Films, 100 Posters,” featuring posters inspired by 100 movies that were screened this year, and “Song Gil-han, the Writer of Cinematic Spirit” about a renowned screenwriter born in Jeonju.