A dream home built to nurture the arts : Constructed in secret, Sueno 339 is a space for creatives to grow

A dream home built to nurture the arts : Constructed in secret, Sueno 339 is a space for creatives to grow 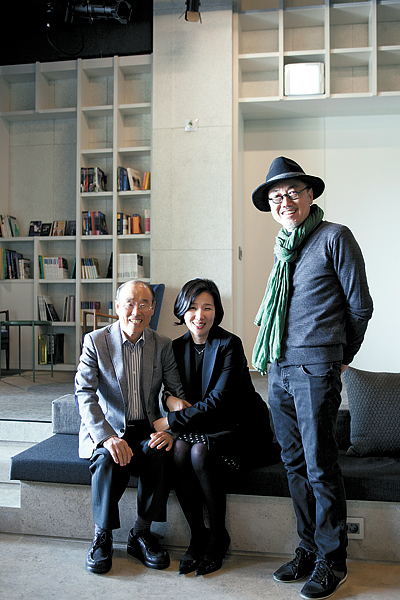 It took more than two years to build this new house at the foot of a hill in Pyeongchang-dong in Jongno district, central Seoul. Just drilling the 453 square meters of bedrock took eight months. The seemingly endless construction made residents of the neighborhood wonder what kind of building was being built and they concluded that the owner would open up a black of profitable studio rooms for rent. But to their surprise, the owner organized an opening event for the new building in February, and announced that the building, named Sueno 339, will be used as a cultural space to host a range of cultural events, from exhibitions to concerts.

Architect Choi Si-young, of Living Axis said he was taken aback when the owner visited him with the project.

“I asked his name but he said, just call me Kim-ssi ajussi (a Korean word referring to a middle aged man).” said Choi.

Noticing the confused face of Choi, the owner handed him his name card and it really had “Kim-ssi ajussi,” which can be translated as “Mr. Kim” in English, in bold letters. Underneath it, in smaller fonts, it reveals his real name, Kim Chang-hwan, and his phone number. 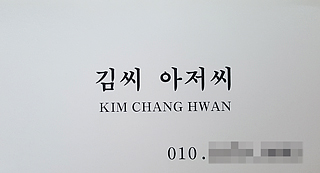 Kim hesitates to reveal what exactly he does, and his business card only says “Mr. Kim.” [JEON HO-SUNG]

Saying that he’s just a businessman who does “this and that, but nothing worthy of writing on my business card,” Kim told Choi that he wanted to demolish the house in Pyeongchang-dong that he’d been living in with his family for 20 years and construct a new building that will serve as a cultural space. All Choi knew of “Mr. Kim” was that he was a businessman whose work did not have anything to do with the field of culture and the arts; that he had four children, and his eldest and youngest daughters were professional musicians, one playing the piano and the other playing viola. Plus, his second daughter had studied literature in Spain.

Wondering what this man was up to, the JoongAng Sunday met Kim early this month for an interview at Sueno 339, which was holding its second exhibition. Until the construction workers began their work, Kim said his family didn’t know anything about it.

“It was planned secretly behind their backs,” said Kim. After finding out about it, Kim said his wife scolded him saying that he should’ve bought a house with the money.

“My philosophy is to always think I’m at the bottom, without quibbling over what I do or who I am. I lived all my life modestly - just a good petit bourgeois,” said Kim, explaining why he introduces himself as Mr. Kim to others. “Because I have nothing to boast about, I just want people to call me Mr. Kim. Rather than living a life of hierarchy, I wanted to live horizontally. Rather than enjoying service and treatment, I want to serve others.“

Kim says he was born in Jongno district, and that he wanted to “leave behind a legacy for my descendants here in my birthplace.”

“I wanted to create a space, that can be used as a gathering place for my children, and their children,” he said.

Moreover, it has always been in the back of Kim’s head to create a space for young artists.

“As civilization progressed, the world became a more convenient place to live in. But the polarization became more serious and more people are living life below the average. I want Sueno 339 to serve these people. So for young people, I want it to act as a platform of opportunities,” Kim said. “Currently, the world, or this country, focuses not on nurturing talented young people, or young people with potential, but rather make their own teams. It really concerns me as to think about what kind of world my grandchildren will live in. People around me told me that I shouldn’t start Sueno 339 by renting the space out to just anyone as it has ‘class.’ But I opened it to everyone. I hope it can be open to those who really need it. It’s my dream to live a life dedicated to helping others.” 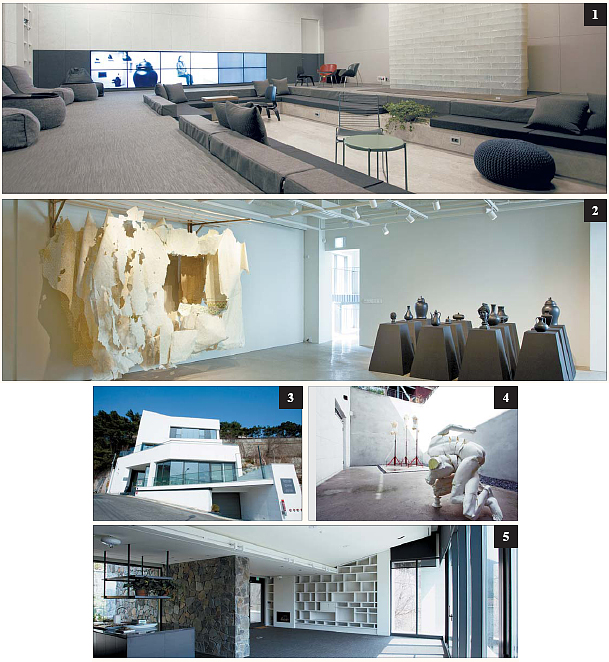 1. Sculptor Shin Mi-kyung’s work “The Wall,” which was made using soap, is currently being exhibited on the ground floor of Sueno 339. 2. Artist Yeon Gi-baek’s “Garibong 133,” left, and Shin’s “Archetype Series,” right. 3. The exterior of Sueno 339 located on a slope in Pyeongchang-dong, central Seoul. It opened in February. 4. Artist Lee Byung-ho’s “Two Figures,” front, and “Triptych,” back exhibited at the outdoor terrace. 5. The top floor of Sueno 339. [JEON HO-SUNG]

Thinking that Sueno 339 was Kim’s retirement plan, Kim said his friends scolded him, saying that it was a bad idea to open a cultural space as it was not going to churn out money. But that wasn’t important for Kim.

“Maybe in 10 to 20 years, the artists who have performed or exhibited their works here can walk past Sueno 339 and reminisce saying, ‘I showcased my work here many years back and it helped me to be where I am today,’” said Kim. “I am not rich enough that I can splurge but I thought that if I could sacrifice a little, I can build a space that’s productive. That’s what I’m investing in.”

Kim even kept the project from his wife and children as he didn’t want to get into squabbles from the start “for doing what I must do.”

Kim’s youngest daughter Kim Eun-joo, 43, said they were shocked after learning what their father had been doing behind their back.

“I was surprised that he even had the money to start this,” she said, explaining how frugal Kim has been.

“The house was always quite cold during winter as we weren’t allowed to turn up the heater and our socks had to be worn until it was impossible to wear inside a shoe,” she added. “I can talk about it all day.”

To help his father fulfil his life-long dream, Kim’s daughters came together to operate Sueno 339. Eun-joo was busy taking care of her child who’s preparing for the college entrance exam this year, but she rolled up her sleeves and decided to help her father by operating a cafe inside Sueno 339. This kind of business was all new to Kim’s family, who said their goal is to at least keep the space running.

Concerned about Kim’s new building, the neighbors have been giving Kim advice such as putting a sign on the house to at least let people know that the space exists. Sueno means “dream” in Spanish and Kim says he wants to help young Koreans build their dreams while providing a “time to rest” for residents.

“In a society where economic value is considered the most important thing, this space may be seen as inefficient,” said Eun-joo. “But we hope that people living in the society are not swayed by economic value alone. We hope this space can become a place that’s all about sharing.”

Using the slope of the land in Pyeongchang-dong, architect Choi came up with two extra floors for Sueno 339. The ground floor, houses a cafe and a multi-purpose hall. By opening up a sliding wall between the cafe and the hall, the whole floor can be used as one space. Instead of installing a stage, Sueno 339 has a rectangular area that’s been hollowed out about 45 centimeters (17.7 inches) from the ground.

“This space can be used as a stage or an auditorium,” said Choi. “After seeing this ‘stage slash auditorium,’ actor Park Sang-won said he wants to hold a one-man show here.”

When there is no scheduled performance or exhibitions, Choi said this can be used like stairs where people who visit the cafe can sit and rest.

Excluding the parking area, heated flooring has been installed on all floors so that people can sit down anywhere they want to watch performances or enjoy artwork. Of course, it made Kim’s wallet thinner, but Kim said he doesn’t think much after making a decision to do something.

“All I care about is that the space can play its role properly,” said Kim.

After the official opening, Sueno 339 hosted two cultural events - an art exhibition followed by a concert by classic guitarist Hwang Min-woong. Currently, the space is holding another art exhibition showcasing various artists including Kim Seo-yeon, Shin Mi-kyung, Yeon Gi-baek and Lee Byung-ho. Sculptor Shin’s work “The Wall” which was exhibited at the Asia Culture Center in Gwangju is currently on display. Shin is known for using soaps to recreate ancient remains. Yeon’s sculpture “Garibong 133” will also catch visitors’ eye. The main material used in this artwork is old wallpaper that was used in a residential building where female factory workers had once lived in the 1970s and 80s in Garibong-dong in Guro district, western Seoul.