LG struggles to deal with flood of TONE fakes

LG struggles to deal with flood of TONE fakes 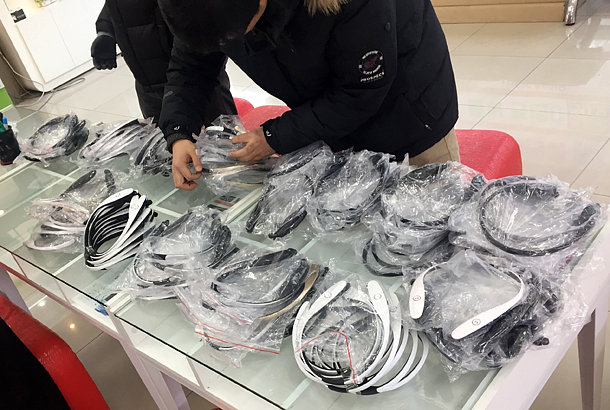 LG Electronics has proclaimed a war against knockoff versions of its TONE series wireless Bluetooth headset.

Having suffered over counterfeits of the product in the past several years, the company announced Sunday it would step up “activities to protect consumer rights and intellectual properties.”

The company has found 4,000 websites that sell fake TONE headsets. The number of fakes confiscated by Korea Customs Service officials and police in the past three years amounts to 40,000, worth some 5 billion won ($4.4 million).

“We will cope with fake manufacturers in a stern manner to protect consumers and manufacturers,” said Park Hyung-woo, managing director at LG Electronics.

The TONE series, released in June 2010, created a unique new product category for neckband headsets and remains a category leader. They posted accumulated sales of 10 million in June 2015 and 20 million last March. The headsets come in varying designs and music quality, joining forces with an array of audio brands such as Harman Kardon and JBL.

The massive popularity of the headset led to a disastrous number of counterfeits pouring into the market. The company asked for authorities to crack down on fakes in 2015 and filed a suit against producers, who were later fined. But fake TONE headsets are still readily available in subways and online.

Fakes have been made in such a sophisticated manner that they are often almost indistinguishable. Some bloggers have therefore posted article explaining how to discern real from fake TONE headsets and LG has begun teaching officials at the Korea Customs Service to look for an absence of a logo on the product or size specifications.

“The quality of counterfeit headsets could cause fatal human injuries,” said an LG spokesman, “should they catch fire or explode.”

The fake phenomenon is not confined to Korea.

Back in February, a U.S. federal court awarded more than $168 million in damages, plus attorneys’ fees and interest, to LG Electronics MobileComm USA, a U.S. sales subsidiary of LG Electronics, in a case against 17 defendants who were found liable for manufacturing, distributing, trafficking and selling knockoff headsets.

In June 2016, the same court granted a restraining order against 22 defendants.

At the time, LG sued nearly two dozen companies in the U.S. selling counterfeit versions of the product and the suit sought nearly $200 million in damages, a permanent injunction, attorneys’ fees and other relief the court believed appropriate.