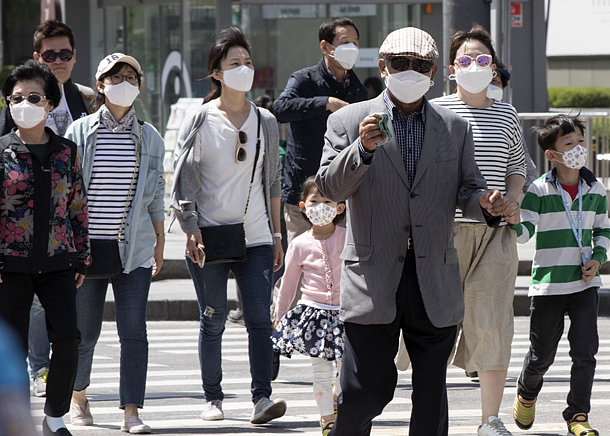 The country’s series of holidays in early May were expected to boost sales at shopping malls and entertainment facilities, but the record high of fine dust levels proved to be a major obstacle.

Major regions in Korea such as Seoul, North Chungcheong and Gyeonggi saw the highest concentration this year for PM10, or particulate matter that is 10 micrometers or less in diameter, on Saturday, prompting regional governments and the Ministry of Environment to issue alerts. The warning advised people going outdoors to wear masks.

The figure is unusual since the weekend between Children’s Day (May 5) and Parents’ Day (May 8) typically brings handsome revenues at department stores, with people heading to these locations to purchase family gifts and eat at restaurants.

“We hoped that the week-long holiday would attract many consumers,” a source at Lotte Department Store said, “but the high fine dust concentrations turned away people.”

Ahead of the May holiday season, April is also considered a favorable month for retailers, but last month fell short of expectations, too. The Korea Environment Corporation reported that all cities across the country suffered 61 times the fine dust levels rated “bad” during April.

Industry insiders see the demand for air purification and other air-related products as playing a vital role here. The combined sales of air purification products was 4 billion won ($3.5 million) last month, the highest ever recorded, according to data compiled by the home appliance industry.

Big discount chains such as E-Mart and the e-commerce site Auction all reported the steep increase in sales of such products.

Other than air purification, other related items such as nasal sanitizers or small plastic bottles containing saline solution are also enjoying huge popularity. But the negative impact of air pollution has not only hit department stores.

A sizable amount of tickets were cancelled on Saturday for a baseball match between the LG Twins and the Doosan Bears.

Some say the government should take a more active role in containing the effects of fine dust particles, as the losses associated increase. The Ministry of Environment estimated that the yearly social and economic costs will be around 10 trillion won.

In terms of air pollution, Seoul - not Beijing - was recently ranked the second most polluted city in the world, after New Delhi.