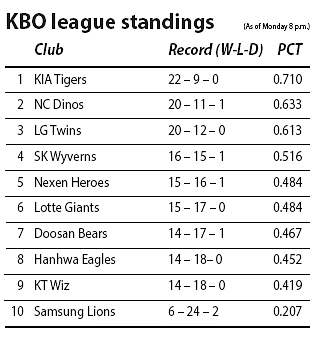 The LG Twins swept the three-game series against the Doosan Bears over the weekend at Seoul Jamsil Baseball Stadium. This is the Twins’ first time in almost five years to win all three games against the Bears.

On Sunday’s game, the Twins won 10-4. With the win, the Twins have now won five consecutive games and achieved their 20th win, improving their record to 20 wins and 12 losses to rank third. Despite the absence of the Twins’ ace pitcher, David Huff, and Lim Jung-woo, the Twins’ closer, their pitching rotation remained strong. The Bears, two-time KBO regular season champions, dropped to seventh.

After getting destroyed by the Nexen Heroes on Thursday, the Kia Tigers came back with three straight wins over the weekend, defeating the Lotte Giants at Sajik Baseball Stadium in Busan. The return of Lee Dae-ho has not been helping the Giants much as they are struggling to score runs in their games.

During the game on Sunday, the Giants changed their batting lineup, having Lee as their third hitter, but it didn’t help much, as they still lost the game 5-3. With three straight losses, the Giants have now dropped to sixth in the KBO standing. 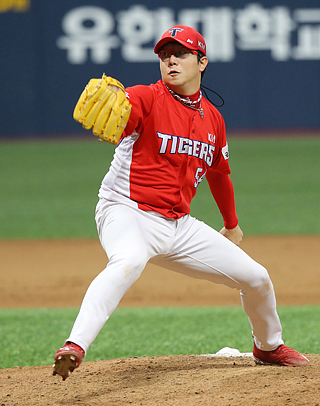 In the month of April, the Kia Tigers are the hottest team in the KBO. Not only were they the first team in the 2017 season to achieve 10 and 20 wins, they are the only teams in the KBO that have not yet recorded two-digit losses. And behind the team’s success, the Tigers’ have Yang Hyeon-jong, their ace southpaw.

Of the six games Yang pitched as a starting pitcher, he has won all the games. Yang is ranked first in the KBO in ERA with 1.52.

In two previous seasons, Yang was a slow starter, but this year, he has been throwing fastballs at an average speed 151 kilometers (93.8 miles) per hour.

With the mix of Yang’s sliders and fastballs, his pitches are now almost unhittable.

After Yang put his name in the Korean baseball team for the World Baseball Classic, he started his season earlier than others. Not only was his physical condition in peak form, he is more aggressive compared to previous years.

Yang will next be pitching against the KT Wiz in Gwangju on Tuesday.