The president we need

The president we need 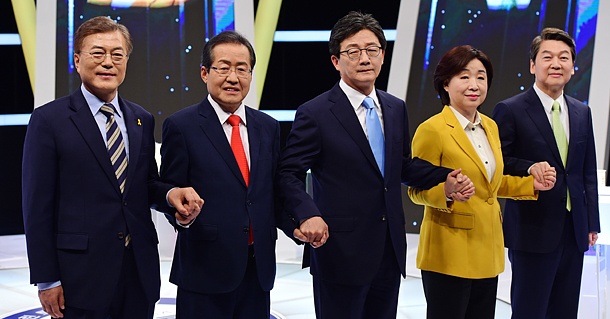 From left, Moon Jae-in of the Democratic Party, Hong Joon-pyo of the Liberty Korea Party, Yoo Seong-min of the Bareun Party, Sim Sang-jeong of the Justice Party and Ahn Cheol-soo of the People’s Party before their last televised debate on May 2. [KIM HYUN-DONG]

The next Korean president will be elected today and take office tomorrow with the cabinet members and staff of his predecessor. As he will immediately start without a transition period, his mind will still be fresh with the promises made on the campaign trail.
But it won’t be easy to turn promises into policy with an opposition-led legislature. It is best to stick to basics when things get tough. As Augustus, the first Roman emperor, once said, “Festina lente.” Make haste slowly.

The candidates, one of whom will replace an impeached president, poured out sweet and tempting promises to woo voters and build their base. But campaigning and governing are two different things. The president will have to prove that he is a leader for the entire nation. He must resort to reason and good judgment for the interests of the general population.

Before setting foot on his five-year journey, the length of one term in Korea, he must make time for calm deliberation. The president will have to create a new framework to gain the confidence of the people who did not vote for him by thinking deeply about their frustrations and aspirations.

The president must have his feet firmly planted on realistic ground. He will be evaluated purely on results. Max Weber in his 1919 essay “Politics as a Vocation” defined the state as an organization that enjoys a monopoly on legitimate force. He emphasized that moral ethics and responsibility over consequences is just as important as the will to realize political goals. A leader must therefore endeavor to draw support from his critics and opponents as much as keeping to the principles of his supporters.

The new president’s first and most important mission is to ensure stability and peace and prevent a war on this land. Economic revival is not possible without security. He must first gain cooperation from within. Whether it be a coalition or through integration, he must use all means to achieve social and political unity. If we fight amongst ourselves, we will not be able to deal with unruly North Korean leader Kim Jong-un and high-handed U.S. and Chinese presidents Donald Trump and Xi Jinping.

Liberals and conservatives, politicians and the public should all work together on the inter-Korean front. Given the lasting division from a war that killed millions, a liberal president should become conservative on North Korean affairs. An outspoken critic of communists, Richard Nixon was the first U.S. president to knock on the doors of Communist China in the 1970s. Helmut Kohl, the chancellor of Germany who continued predecessor Willy Brandt’s vision of two states, one nation, was able to set the ground for unification.

The same engagement approach is necessary to solve our complex economic problems. There should be no ruling or opposition party when it comes to generating sustainable growth, hiring young people, achieving balanced growth through chaebol reform and easing inequalities. U.S. President Franklin D. Roosevelt was able to pull the country out of the Great Depression by gaining bipartisan support for his renewal plan within his first 100 days in office. Nothing can be done alone by a single president regardless of his strong conviction.

The American media has been highlighting the leading liberal candidate Moon Jae-in, who has pledged to first meet Trump instead of Kim Jong-un of North Korea. It is realistic to reaffirm the South Korea-U.S. relationship and freeze North Korea’s nuclear problem for any breakthrough in the inter-Korean stalemate of the last nine years under conservative governments.

Moon nevertheless is an uncompromising person who highly prizes principles and justice. But he will be no different than his disgraced predecessor Park Geun-hye if he neglects the voices of his critics and merely listens to the supporters he has gained through his years as a civilian activist.

When Moon’s former boss, the late President Roh Moo-hyun, agreed to send Korean troops to Iraq to support the U.S. engagement, he said he personally opposed the move but nonetheless made the decision as a president of the people. He compromised by keeping troops to a limited scale and in the role of noncombatant engagement in rebuilding Iraq. No soldier was hurt, and South Korea was able to continue participating in reconstruction efforts. The decision was made through live and rigorous discussions in the presidential office. Moon, as Roh’s chief of staff, proudly shared the story.

The new president must be more open to discussion than Roh’s administration. He must reflect all the voices of different government offices: the Ministry of Unification, which pursues North Korea policy with the perspective of Koreans as one race; the Ministry of Foreign Affairs, which sees Pyongyang as a diplomatic matter; the Ministry of National Defense, which views the North as an enemy state; and the National Intelligence Service, which surveils North Korea with South Korea’s national interest in mind.

Society is an incomplete community of imperfect people with differing beliefs. Nothing can be solved in the name of justice alone. This bisected land could be split further among South Koreans. The next president must be a wise person who values both principles and compromise, supporters and critics, and balances conviction with responsibility. He must keep his ears open to criticism and be willing to compromise for the greater good of national interest. Only then will he become a leader that ensures peace and economic sustainability.