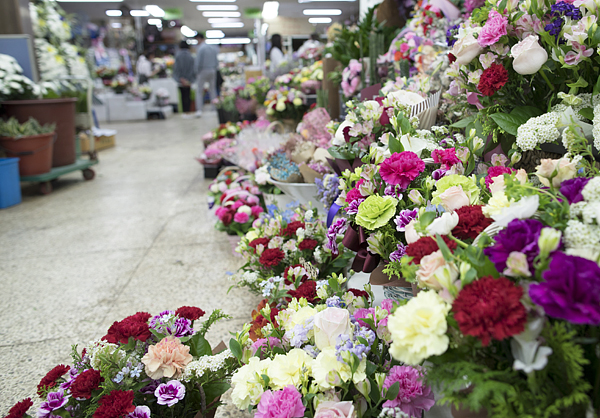 Carnations are on display at the Korea Agro-Fisheries & Food Trade Corp in Seocho District, southern Seoul, on Sunday, a day before Parents’ Day. The agency said that 179,835 bouquets of carnations were sold from April 24 to May 5, which is a 10 percent drop when compared to the same period last year. [YONHAP]

Sales of carnations dropped significantly ahead of Parents’ Day (May 8) in the country.

As there were a string of 11 days of holidays at the beginning of this month, many people left the country and the so-called Kim Young-ran antigraft law was likely to have a negative impact on flower sales for Teacher’s Day on May 15.

Guidelines published by the anticorruption commission in May said accepting gifts worth 50,000 won or receiving more than 100,000 won in cash for a wedding or funeral was illegal.

Government data also showed that many carnations sold in the country are made in China, not in Korea. According to Korea Agro-Fisheries & Food Trade Corp, imports of carnation were $2.55 million last year, 59.5 percent higher than the 1.6 million in 2012. Imported carnations accounted for 25 percent of those distributed in the local market. Furthermore, 95.4 percent of foreign flowers came from China with cheaper price tags.

The aT said the size of farms raising carnation flowers also dropped as well. The size dropped 39 percent over 2010 to 46.8 hectares (115 acres).

“It appears that more artificial flowers are used for carnations when compared to real flowers and this is leading to importing more relatively cheaper flowers from abroad,” said the aT in a press release. “We are trying to have many people buy flowers ahead of the holidays as we worry about weakened domestic consumption of flowers.”

Meanwhile, Korean children and parents both preferred cash as presents for Parents’ Day.