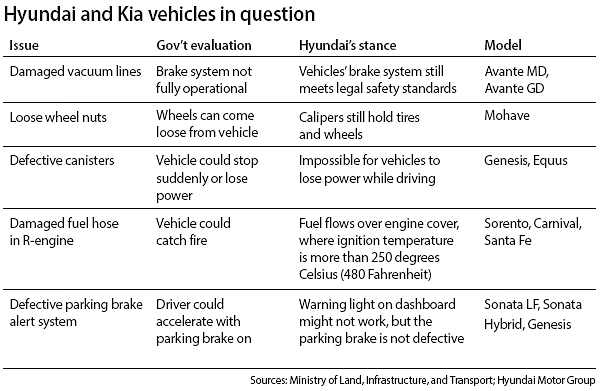 After Hyundai Motor and Kia Motors refused a government request to recall several of their vehicles last month, the Ministry of Land, Infrastructure and Transport held a hearing on Monday to discuss the automakers’ objections.

It is the first hearing in Korea to take place after a car company declined a recall request.

The ministry said in a press release early Monday that Hyundai Motor Group, the parent company of both automakers, would likely argue that providing free repairs for the defective vehicles would suffice.

The hearing discussed a total of 250,000 cars encompassing 12 models, according to the ministry.

Last month, Hyundai and Kia filed an objection to a government request to recall the models. A former employee of Hyundai Motor had tipped off the ministry and local reporters about 32 defects in vehicles made by both companies.

Upon inspection, the Transport Ministry found five defects that posed threats to driver safety and asked the automakers to recall the cars, a request that Hyundai and Kia refused. It was the first time a local carmaker denied a government request for recall.

Third-party experts unaffiliated with the Transport Ministry and carmakers oversaw the hearing. The Transport Ministry will make a final decision on whether to force a recall based on the outside experts’ report. If the automakers fail to comply with that order, the ministry could opt to shut down production and sales of the vehicles in question.

Hyundai and Kia have already incurred heavy losses from recalling cars equipped with defective Theta 2 engines. Recalling 170,000 of those vehicles had already cost the companies 360 billion won ($320 million) during the first quarter this year.

Some believe an additional recall of 250,000 vehicles could deal a further blow, but a Hyundai Motor spokesperson said it would have a limited impact. “Such expenses are taken out of the reserves that company has in case of such emergencies,” he said.

Still, the recent scandals seem to have taken a toll on the carmakers’ reputation among local consumers, some of whom are outraged that vehicles with the Theta 2 engine were recalled much earlier in the U.S.

“Business strategy aside, the price discrimination [by Hyundai Motor] between the U.S. market and Korean market was quite outrageous to me,” said Mr. Lee, an office worker in Seoul who brought his Hyundai-made car from the United States. “These cases make me believe more and more that Korean consumers are perhaps less cared for than consumers overseas.”