LG announces 20 years of business in India have paid off

LG announces 20 years of business in India have paid off 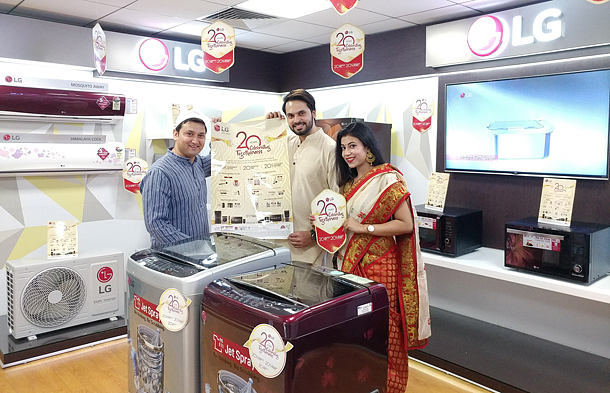 Indian customers visit an LG Electronics’ shop in India on Monday. This year marks the 20th anniversary of LG’s Indian business, which grew 60 times in terms of sales revenue during that time. [LG ELECTRONICS]

LG Electronics’ India branch saw a revenue increase of 60 times over its 20 years of business there, establishing a strong foothold in the country based on its strict localization strategy and premium branding.

Water purifiers were also designed with higher functionality in water filtering, the company added in its statement.

Thanks to these efforts the Korean electronics company was named the most attractive brand by Indian consumers last year, according to the market research firm Trust Research Advisory.

In 2015, the company was selected as the most trusted brand. Consumer trust, according to LG, was built upon premium branding of its home appliances and its quality products.

LG’s accumulated sales of televisions in India amounts to 50 million units, followed by refrigerators at 30 million, washing machines with 16 million, and microwaves at 4 million.

LG operates two manufacturing facilities in India. One is in New Okhla Industrial Development Authority, 30 kilometers (18.6 miles) southeast of New Delhi, and the other in Pune, the second largest city in the Indian state of Maharashtra, after Mumbai.

A separate software research institute is located in Bangalore, one of India’s most developed cities.

From these facilities, the company supplies appliances to Indian customers as well as those in the Middle East and Africa.

These facilities employ more than 3,400 workers, a steep increase from 400 employees in 1997, with 99 percent of employees hired locally.

“We are contributing to job creation in India,” the company said in a statement.

Commemorating the 20th anniversary of its business in the Indian market, the company has been implementing a promotion campaign from last month, including price discounts and interest-free 20-month-installments. Such promotions will run through the end of this year.

India, home to 1.3 billion people, has been noted as a strong consumer market for premium home appliances in the future.