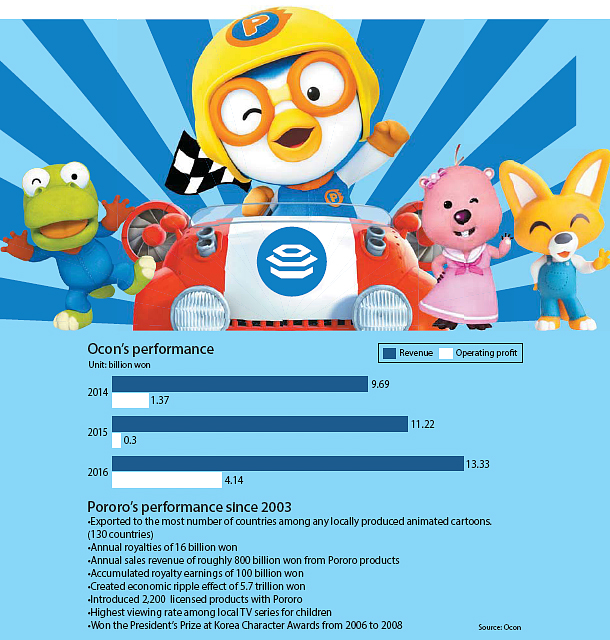 Ocon Animation Studio, the creator of beloved blue cartoon penguin Pororo, is preparing to list the company on the Korean stock market by next year.

A source from the three-dimensional animation company told the JoongAng Ilbo on Sunday that it inked a deal with securities firm Mirae Asset Daewoo for public listing.

Ocon, a Korean animation studio established in 1996, created the original Pororo TV series and owns copyright of the program. While some screening will be necessary for listing, Ocon will not face difficulties as its performances have been rosy.

“Ocon is already a recognizable company with its Pororo character and the company’s operating margin reaches 30 percent, thanks to increasing royalty earnings from the character,” an official from Mirae Asset Daewoo said. “The listing process is likely to be completed by the first half of next year at the latest.”

Last year, the Korean animation studio had 13.3 billion won ($11.7 million) in revenue with 4.1 billion won in operating profit. While the revenue itself is not substantial, Ocon has strength in its character value. Intellectual property analysts estimate the value of Pororo alone to be 400 billion to 500 billion .

Kim Beom-soo, Kakao’s co-founder and board chairman, is expected to invest a lot into Ocon. Right now, Kim Il-ho, CEO of Ocon holds 73 percent of the company stake but that needs to be distributed for public listing.

Public offering of a flagship intellectual property company means the animation industry finally meets capital. While local animation studios have been recognized as top-class players in terms of content producing capabilities, the lack of capital backing has led many studios to suffer in business management.

“Listing of Korea’s flagship intellectual property company will be a milestone in breaking the past notion that animation is not a money-making business in Korea,” said IT specialist Park Yong-hoo.

When Ocon goes public, the overall ecosystem in the animation industry is also expected to get a boost. Among Korea’s content businesses, game, movies and the Korean pop music industry have grown rapidly led by major giants in the sector. However, there hasn’t yet been a leading player in the animation business. Without a leading player, sectors related to production, marketing, distribution of animated content have remained weak.

Ocon, after listing, is planning to jump into a so-called platform business by creating IP Holdings. It means the company will expand its business portfolio from only creating animated content.

So far, Ocon has exported its Pororo series and another series starring dinosaur Dino to more than 130 countries. It has also tackled foreign markets by jointly producing the animation “Island of Inis Cool” with companies from Ireland and Luxembourg and co-producing a theater production of Pororo with China.

“We will use the capital invested after public offering into taking smaller local studios abroad,” said CEO Kim of Ocon. “By holding hands with them [other local studios], we will pioneer into markets in China, India, Southeast Asia and Latin America.”

He added the competence of Silicon Valleys in Israel or the United States comes from active mergers and acquisitions creating an ecosystem where successful unicorns provide investment for burgeoning start-ups.

“We will share know-hows of Ocon’s content production and distribution with late movers in the industry and partner with them to raise corporate values of smaller studios,” Kim said.

Ocon currently is preparing to launch new TV series overseas with smaller studios hoping for the success of Pororo.

The Korean studio will also bolster its branding business, with specific products like school supplies and fashion items. The company can also partner with entertainment facilities like theme parks to offer its characters for branding. Ocon also is considering M&As with school supply manufacturers or fashion companies. Last month, the company teamed up with Tongyang Hanil Synthetic Fiber to launch children’s clothing line Pororo Care.

“We aim to cooperate with related companies from the early stage to develop products branded with our characters to strategically enter overseas markets and raise profitability of the branding business,” said Kim Jong-beom, vice president of Ocon.

Ocon has earned 100 billion won from royalties of the Pororo TV series since its release in 2003.