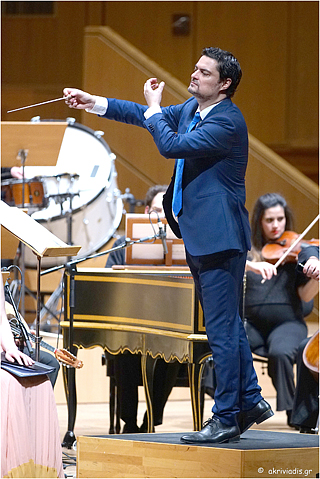 Around the world, the operas of Antonio Vivaldi (1678-1741) have not received as much recognition as his famous violin concerti “The Four Seasons.” So, when the Korean National Opera staged Vivaldi’s “Orlando Finto Pazzo” last year, becoming the first Asian country to produce the Baroque opera, many doubted whether it would appeal to the wider public.

With the belief that a Vivaldi opera would be a success in Korea, Kim Hak-min, the artistic director of the Korean National Opera, took a trip to Cremona, Italy in search of the perfect piece. After finding the score, he decided to stage “Orlando Finto Pazzo,” an unfamiliar opera, even to Italians.

“We are now too familiar with romantic operas by Verdi and Puccini. That’s why Europeans have begun to discover long-lost operas of the Baroque times and revive them in today’s theaters,” said Kim. “I believe Korea is capable enough to jump on the bandwagon of European theaters introducing great Baroque operas.”

Despite the concerns, Korea National Opera’s staging of “Orlando Finto Pazzo” last year was met with great reviews from local critics and won the hearts of operagoers. The company has decided to stage encore performances for four days starting Wednesday at the LG Arts Center in southern Seoul. Its strong libretto, or the story line of the opera, certainly has an appeal but what really captivated audiences was the refreshing Baroque music.

To produce authentic Baroque sounds, the upcoming “Orlando Finto Pazzo” uses period instruments including the harpsichord, top, and the theorbo, above. [JOONGANG ILBO]

Therefore, the Korean National Opera has decided to go 100 percent Baroque for the upcoming encore performances.

“When the Korean National Opera staged the show last year, it was a mix of Baroque instruments, or what we call period instruments, and modern instruments. So it was a bit of a hybrid,” said Greek maestro George Petrou who will be conducting the Camerata Antiqua Seoul, a small orchestra specializing in Baroque music. “But for the upcoming performances, it will be 100 percent authentic. It will definitely create a different sound.”

According to Petrou, some of the Baroque era instruments for the upcoming production include a harpsichord, an important keyboard instrument of the era, and a theorbo, a plucked string instrument of the lute family that looks somewhat like the guitar. Instead of using modern-day horns, the performance will also use natural horns that were used during the Baroque era, which lack the valves that most modern horns have.

“Everything we use for this production are original instruments that Vivaldi could use,” said Petrou. “It creates a completely different sound - a sound that would not come from a modern orchestra. There are things that old instruments can do that modern instruments cannot. ”

To learn more about Baroque opera and the upcoming “Orlando Finto Pazzo,” the Korea JoongAng Daily sat down with maestro Petrou for an interview last week at the orchestra’s rehearsal space in Seocho District, southern Seoul. The following are edited excerpts from the interview.

Q. The orchestra seems quite small. Is this the full orchestra that will perform?

What’s are the characteristics of Baroque music?

So all those excess emotions are included in this opera?

Baroque opera is about a huge range of emotions. For example, many are familiar with romantic operas, which is mainly about pain and loss. You don’t get a lot of humor or happiness in romantic operas. And not many emotions are portrayed in music. But inBaroque opera, each aria has its own musical world and it’s like creating a puzzle of many different emotions. The composer tries not to include the same feeling more than once or twice in the opera, so the composer tries to bring a new musical picture and emotion [to each scene] of the story. It’s like when you are listening to Frederic Chopin’s 24 Preludes for example, all 24 have musical images that are completely different to each other. That’s the idea of the Baroque opera. The arias must be different from one another.

Many have given this opera high praise, but it still is not as popular as many of the famous romantic operas. Why?

Vivaldi’s operas are a new discovery. Among many of the operas he wrote, only a couple dozen survived and it’s only been about a decade since Europeans began to discover and stage them. Nowadays [in Europe], Vivaldi operas are extremely popular. His music is so direct. When you listen to Vivaldi, you feel like you’ve heard it before. You can never go wrong with Vivaldi’s music. For my orchestra in Greece, when we want to sell tickets, we [can rely on] Vivaldi. Whatever you do Vivaldi, even if it’s unknown works, people come to listen. Vivaldi’s music, as all great music is, appeals to the general public, but also to people with a musical background as they can discover new things and be amazed [with his talent].

How significant is the music in an opera?

It’s always the basic question about opera: which is more important, the music or the libretto - the story line? Experience shows that the great operas that have survived and remain popular to this day always have, of course, wonderful music, but also a very believable story line. For example, operas with fantastic music like “Fidelio” by Beethoven have not really survived. We do it because it’s Beethoven, but it’s not regarded as one of Beethoven’s popular works. In fact, if it wasn’t Beethoven, we probably wouldn’t even perform it today. If you look at popular operas like Handel’s “Rodelinda” and “Tamerlano,” they have a wonderful story line.

In order for an opera to be successful, no matter how beautiful the music is, there has to be a story line that enables the music to express something. As you know, opera combines theater, the visual arts, the voice and sometimes dance. If one of these elements is weak, you have a problem.

For this production, what is your focus?

I’m focusing on bringing the music forward so that it helps tell the story. In “Orlando Finto Pazzo,” the music is not so decorative. It’s written to highlight the story. So, I’m trying to tell the story like the stage director does, but with music. I would say that’s what my contribution tis. Compared to last year, the performance should be different, and that will be in the music.


The upcoming opera “Orlando Finto Pazzo” by the Korean National Opera under the direction of Fabio Ceresa will be held four times from Wednesday to Sunday at the LG Arts Center. It starts at 7:30 p.m. Wednesday and Friday; at 3 p.m. on Saturday and Sunday. Tickets range from 20,000 won ($17.67) to 120,000 won.