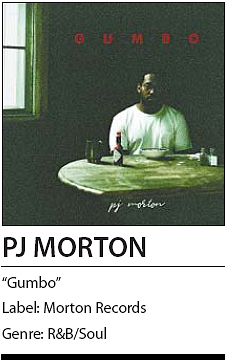 PJ Morton may be the keyboardist for pop-rock band Maroon 5, but he returns to his New Orleans musical roots on his new solo album.

Morton, who joined Adam Levine and friends in 2012, meshes an easy-flowing sound of contemporary soul with gospel elements on “Gumbo.” It’s a musical approach that works for Morton, whose father is Bishop Paul Morton, a Stellar Award winner and Grammy-nominated gospel artist.

Morton’s fourth offering is a short listen, lasting less than 30 minutes. But in nine tracks, he speaks on various topics, from love to religion.

On “Claustrophobic,” Morton sings and raps about being musically stifled after someone suggested they wanted to tinker with his sound because he wasn’t “mainstream enough.” “

Morton questions some people’s religious stance on “Religion,” singing: “But you blame God when it’s all your fault/Where’s the love that your God spoke of?” He also sings about recapturing the first love-struck moment of initially meeting a potential mate on “First Began,” the first track on the album. AP