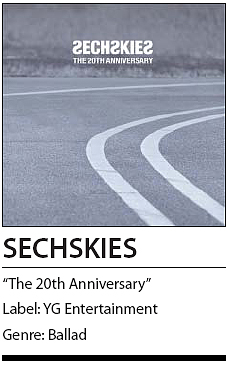 Twenty years has been enough time for Sechskies to make a musical shift, as they are back with an album with both nostalgic and contemporary sounds. Since their 1997 debut, the groups albums have always been outspoken and frank; seen best in “School Anthem,” which called out the problematic education system in its lyrics. On this 20th anniversary album, the old-school boy band returns with the hit-making power of YG Entertainment behind them.

Including remastered versions of their old hits, the album consists of 11 tracks. Despite its name, the track “Sad Song” is a fast-tempo track about not wanting to sing another sad song. It incorporates house music and a lively chorus, and was composed by Future Bounce and Epik High’s Tablo, one of the top rappers in Korea.

The tender ballad “Be Well,” another song composed and written by Tablo, is a heartbreaking serenade to a past lover, wishing her happiness and luck.

“Three Words” is another mellow ballad about always being beside a lover no matter what.