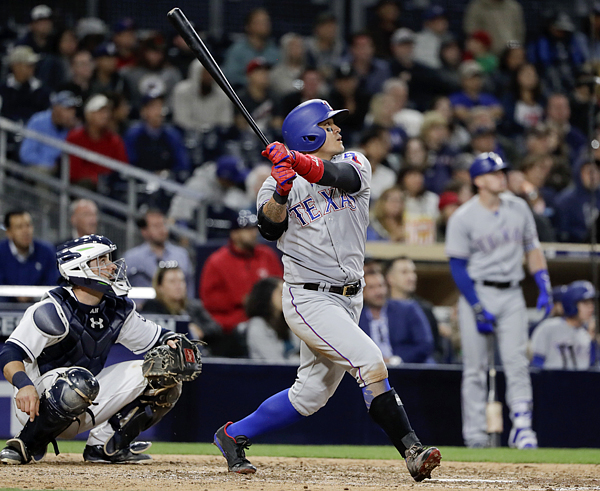 Choo Shin-soo of the Texas Rangers watches his home run during the seventh inning against the San Diego Padres on Monday. [AP/YONHAP]

Choo Shin-soo of the Texas Rangers hit his 150th career home run in the Major League Baseball (MLB) against the San Diego Padres at Petco Park on Monday. It was a glorious moment. Still, the Rangers lost 5-1.

As the Rangers’ eighth hitter and right fielder in its away game, Choo hit a solo home run in the beginning of seventh while the Rangers were down 4-0. When there wasn’t anyone on first base, Choo hit off of Brad Hand’s fastball, pitched at a speed of 148 kilometers per hour over the left center fence. During the game, he was one-for-two, including a home run, with one walk, a run and a hit. And Choo’s batting average increased from 0.238 to 0.243.

With that, Choo achieved his 150th major league home run in 11 years, since he first hit a home run in the major leagues on June 29, 2006, playing for the Cleveland Indians.

Choo got on the batter’s box for the first time in the beginning of the third as the Rangers’ first batter but he was struck out by Trevor Cahill’s sinker while the count was at two ball-two strike.

After, as a second batter in the beginning of fifth, Choo was given a walk, recording his 120th stolen base. In August 2013, Choo exceeded 100 home runs and 100 stolen bases.

Of the Asian major leaguers, Hideki Matsui of the former Tampa Bay Rays is the only player to hit more home runs than Choo at 175. Ichiro Suzuki of the Miami Marlins is ranked third in this category at 115 home runs.

But in 2016, Choo struggled as he was put on the disabled list four times. He concluded his season with a 0.242 batting average, only hitting seven home runs. So far in this season, Choo played in 29 of the 33 games, getting himself off the disabled list. However, looking at his batting average, it’s taking some time for Choo to recover. In the season opener, Choo was the second batter, but on April 17, he was seventh, and on April 27, he was ninth.

He played as the second batter in the most this season, but in recent games, Choo appeared as the Rangers’ seventh or ninth batter.

Choo’s inconsistency in the batting lineup may be due to the team’s poor performance, ranking 29th out of 30 teams in team batting average at 0.215. Jeff Banister, manager of the Rangers, had been constantly changing the batting lineup to figure out their problem, but he has yet to find a solution.

Even in their game against the Padres, the Rangers’ batting lineup had only two hits, getting stuck by Cahill. With three consecutive losses, the Rangers are last in the MLB’s American League West with 13 wins and 20 losses as of Monday.