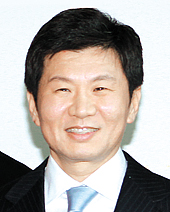 Chung Mong-gyu, president of the Korean Football Association (KFA), won a seat on the FIFA Council on Monday.

As there were four seats available this time for Asia, it wasn’t as difficult as his first attempt to win a seat in 2015.

Of the four seats, one had to be taken by a female candidate. And since there were only three male candidates, it wasn’t very hard.

“I feel very privileged and humbled to be elected to the FIFA Council,” Chung said, as quoted on AFC’s website. “I feel a lot of responsibility to represent Asia and FIFA well, so I will do my best.”

Along with Chung Mong-gyu, Mariano Araneta of the Philippines, Zhang Jian of China and Mahfuza Kiron of Bangladesh have been designated on the FIFA Council at the Asian Football Confederation (AFC) Congress in Manama, Bahrain. They will serve two years as FIFA Council members, starting from 2017 to 2019.

Prior to Chung, one other Korean won a seat - Chung Mong-joon, former president of KFA, who was a member of FIFA’s executive committee from 1994 to 2011.