Son vies for April’s player of the month award

Son vies for April’s player of the month award 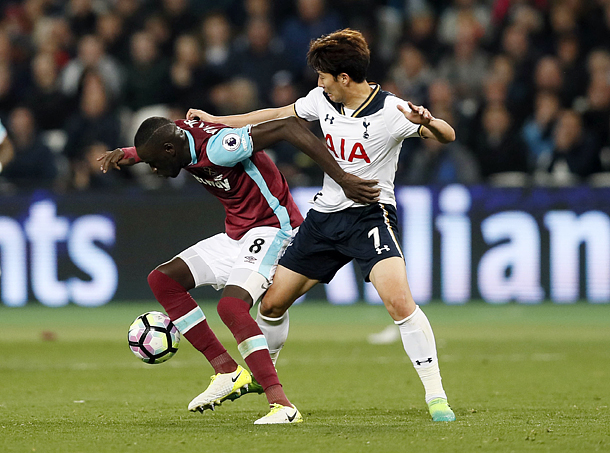 Son Heung-min of Tottenham Hotspur during its most recent Premier League match against West Ham United at London Stadium on Friday. [AP/YONHAP]

Son Heung-min of Tottenham Hotspur has a chance to achieve another monumental feat this month, getting nominated once again as one of seven April English Premier League (EPL) player of the month candidates on May 4.

Premier League’s player of the month award is considered as one of the hardest awards to earn since it is given only once a month, a total of eight times, throughout the season. According to the EPL website, a total of 507 players have touched a ball at least once this season and 430 have attempted a shot.

The player of the month is selected with 10 percent based on fan votes and 90 percent on scores by professionals like Alex Ferguson, Thierry Henry, Jermaine Jenas, James Carragher, Alan Shearer, Rio Ferdinand and more. Throughout 23 seasons since the EPL first gave out the award, only 41 players have earned it more than twice throughout their career. Steven Gerrard, who holds the record in this category, was awarded six times throughout his 17 years in the EPL.

When Son won the player of the month award for the first time in September 2016, he was the first Korean football player to do so in the EPL.

If he wins another this month, he will become the first Asian football player in the EPL to win the award twice in one season and will be the first player in the 2016-17 season to win it twice.

In addition, he will become the 16th player in EPL history to receive the award twice in one season.

Of the players who have won the award in previous months, Son and Hazard are the only ones to be nominated more than once.

Looking at the previous player, they were given more to strikers. Of the 204 awardees, 108 players were strikers and only 75 were midfielders. This season, strikers were once again favored, so it is very likely Son, Aguero, Benteke will be competing for the award.

All three players have recorded five goals and one assist in the month of April. That being said, there will be fierce competition between the three. But in this area, Son is at an advantage as his team had the best result in April.

While Son scored five goals, Hotspur won all six of its games in April and chased closely after Chelsea. This season, Hotspur is ranked second with 23 wins eight ties and four losses with 77 points whereas Man City is ranked fourth and Crystal Palace is ranked 16th.

The player of the month for April will be announced on Saturday.