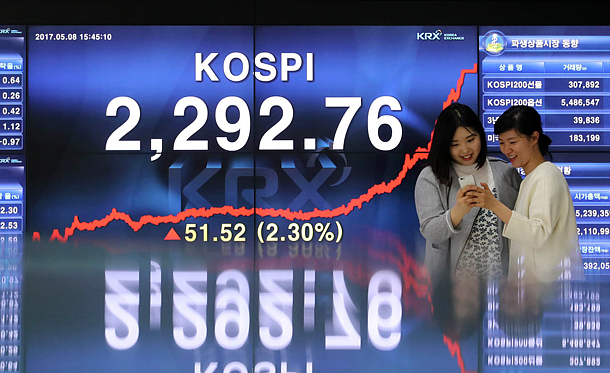 A stock market board at the Korea Exchange in Yeouido, western Seoul, shows the Kospi closing at 2,292.76 on Monday, up 2.3 percent from the previous trading session. [YONHAP]

Korea’s record-setting stock market will likely face adjustment in the second half of this year due to political uncertainties and geopolitical risk from North Korea’s nuclear threats, a local think tank said Monday.

The Korea Center for International Finance, a government-funded research institute, projected the upswing on the main index, the Kospi, would likely be limited by unfavorable factors like weakened earnings momentum at companies and interest rate hikes by central banks.

The Kospi entered this month with record highs, backed by better-than-expected earnings at blue-chip companies, improved export figures and fading political unrest. The index closed at 2,292.76 on Monday, more than 50 points, or 2.3 percent, higher than Thursday’s 2,241.24, which was itself a near six-year record.

This upswing will likely taper off in the latter half, the think tank said in a report. “The local stock market hit new highs, but fluctuations will intensify in the second half of this year because of external headwinds as well as domestic issues,” it said. 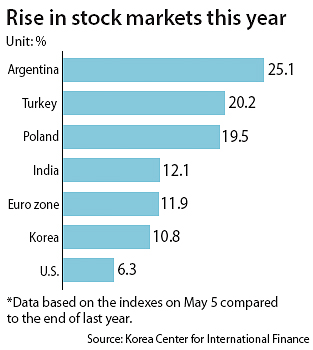 In terms of external factors, the report cited protectionist sentiment and heavier scrutiny of foreign currency values under the Donald Trump administration as well as political uncertainties in Europe, including Britain’s exit from the European Union.

The think tank noted that the Kospi’s rally is in line with bullish sentiment in stock markets around the world. The index rose 10.8 percent as of Friday compared to the end of last year, just as other emerging markets like India and Poland posted increases of over 10 percent.

The biggest jump was in Argentina at 25.1 percent, followed by Turkey with 20.2 percent. The United States saw a 6.3 percent rise, which led the global stock rally.

Many securities companies have a more optimistic outlook on the Kospi, predicting the index might go well above up the 2,300 level this year.

Yang Ki-in, research center head at Shinhan Investment, expects the Kospi to hit 2,350 in this year’s second half.

The analyst added that the U.S. dollar may continue to weaken after June, which would send capital flowing to emerging markets.

“When we look at Korea, listed companies will likely post a net profit of 100 trillion won [$87.8 billion] this year,” Yang said, “Along with that, the companies’ efforts to enhance corporate governance and increase dividends will all contribute to easing the so-called Korea discount,” referring to the belief that Korean stocks are undervalued.

Research centers at Samsung Securities and NH Investment & Securities also projected the Kospi would surpass the 2,350 mark this year.