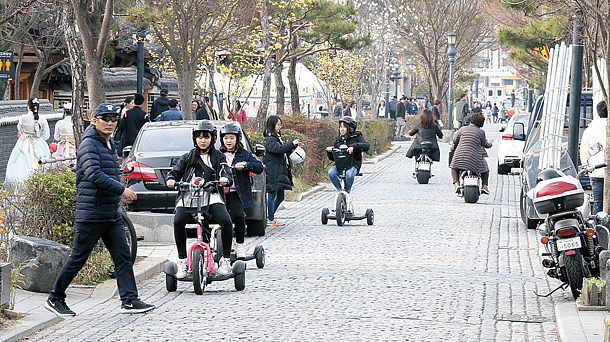 Teenagers ride electric scooters on a two-lane road at the hanok village in Jeonju, North Jeolla, on March 29. It’s illegal for people without a driver’s license to operate such devices. [JOONGANG ILBO]

Call it whatever you want - electric wheel, one-wheeled Segway, personal mobility device - but just don’t call it a bicycle.

Electric unicycles, ridden gripped between the legs, are now ubiquitous on the sidewalks of Seoul, but the devices, along with the equally popular two-wheeled hoverboard, remain in a legal gray area in terms of traffic law.

Electric unicycles and hoverboards are banned from bike-only roads and even parks because Korean traffic law categorizes them as motor vehicles. Anyone who rides them, though, knows sharing the road with cars is equally, if not more, dangerous.

There are growing voices in Korea to ease regulations on electric unicycles and hoverboards, especially as they become more popular. Some 30,000 electric unicycles and hoverboards have been sold so far in Korea, and the market size is estimated to be 50 billion won ($44 million) as of the end of last year. Sales of the devices from March to April grew 10 times from a year earlier on SK Planet’s e-commerce platform 11st.

The biggest reason for the rise is the devices’ cost efficiency.

Ninebot, an electric unicycle by Chinese manufacturer Xiaomi, can travel 50 kilometers (30 miles) on a single charge, which takes just three hours. The charging cost is only 100 won.

Prices of the products themselves have also been going down. In the early 2000s, the devices cost as much as 13 million won. Now, they’re in the 1 million won range.

Chinese-made products cost even less, often half the price. Ninebot Mini, a smaller version of Xiaomi’s electric unicycle, goes for just 350,000 won. The device can move at up to 16 kilometers an hour, tackle up to 15-degree hills and travel 22 kilometers on a single charge. It’s also incredibly light, at 12.8 kilograms (28.2 pounds), thanks to use of strong yet airy carbon fiber material.

Riders of electric unicycles and hoverboards like their eco-friendliness and ease of use. Some use them to commute to work or school, since they can go as fast as 20 to 30 kilometers per hour. Most people use them to travel short distances, like between parking lots and offices or subway stations and home.

Despite their prevalent usage, regulations dictating their use in Korea remain in their infancy. It’s illegal to use them on bicycle-only roads, parks and sidewalks but perfectly fine to ride on the street. However, since the devices lack mirrors and turn signals, they are dangerous on the road.

Based on the government’s categorization of them as motor vehicles, using them requires a driver’s license, which only those 16 or older can get, meaning kids that ride electric unicycles and hoverboards are technically breaking the law.

“Rather than limiting personal mobility devices to the road, the government should consider issuing driving approval according to the specifications of these machines such as their maximum speed, travel distance, width and weight,” said Myeong Myo-hee, a research fellow at the Korea Road Traffic Authority, a government agency.

Chinese manufacturers are leading the market for these devices. The Korea Trade-Investment Promotion Agency estimates China makes up 80 percent of the global 2 trillion won market for personal mobility devices. According to data from Fuji Research Institute and Hyundai Securities, the market is expected to surge to as much as 26 trillion won by 2030, propped up by preference for greener transportation methods, growing urbanization and increasing numbers of single and two-person households.

Aging societies are also expected to contribute to the market’s expansion. The idea is that developers of electric unicycles and hoverboards, which currently require some amount of dexterity, might diversify to devices that serve those with trouble walking or traveling on their own.

“The prevalent social structure has led to a decline in long-term caregiving support from families,” market research firm Transparency Market Research said in a report in April. “This creates an environment conducive to the expansion of the personal mobility device market.”

Korean companies are belatedly scrambling to come up with their own inventions. Robo3, GreenTrack and Green Mobility are a few of the firms. Korean developers of personal mobility devices have 61 patents total between 2013 and 2015, up 177 percent from three years prior.

Insurance companies are also launching products related to the vehicles. Chung Chang-hyun, managing director of Mininotors, producer of Dualtron Man, a two-wheel skateboard-like device, said the company has been compiling the loss ratio for personal mobility devices in collaboration with Meritz Fire and Marine Insurance. The two companies will release insurance policies for damage liability in June.

The government is planning to install personal mobility device-only roads at the main park in Sejong City by 2019 as a pilot.