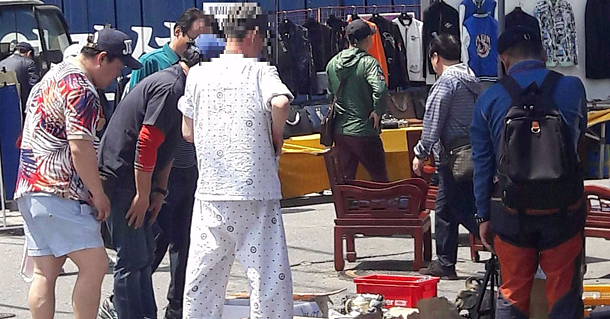 A patient of a hospital in Dongdaemun District, eastern Seoul, shops at a market near the hospital on May 3. [PARK JUNG-RYUL]

Patients are walking in and out of hospitals without proper monitoring, the JoongAng Ilbo found after randomly investigating hospitals in Seoul.

A man in his 40s, clad in a hospital gown, exited a hospital in Dongdaemun District in eastern Seoul around 12:30 p.m. on May 3. Smoking a couple of cigarettes on the street, he then entered another hospital and used the bathroom there.

He then walked to a nearby market, tried on some clothes, bought a pair of earphones and returned to the hospital.

He was absent from the hospital for about an hour, yet none of the hospital staff seemed to ask where he had been.

Though the patient was not carrying an infectious disease, experts caution more hospitals to improve their monitoring system, especially in light of the recent incident of a patient with a liver condition who almost died after eating shellfish and contracting vibriosis after he snuck out of a hospital last month.

The 52-year-old man was initially hospitalized in Gyeonggi earlier in April for hepatic cirrhosis, or scarring of the liver, which in his case was due to alcohol abuse.

Patients suffering from liver diseases are often asked to stay away from consuming shellfish from May to October, when Vibrio vulnificus, a type of bacteria of the Vibrio genus, is more active.

The bacterial infection is caused by eating raw or undercooked seafood or exposing open wounds in seawater. Those with chronic liver illness are more likely to be infected by the bacteria.

The patient snuck out of the hospital on April 12 against the doctor’s directions, ate shellfish in a restaurant and contracted vibriosis. The virus can enter the bloodstream and lead to septicemia, or blood poisoning, causing septic shock.

“People with a Vibrio vulnificus infection can get seriously ill and need intensive care or limb amputation,” the U.S. Center for Disease Control (CDC) and Prevention says on its website. “About a quarter of people with this type of infection die, sometimes within a day or two of becoming ill.”

The patient suffered septic shock but recovered. The Korean CDC announced on April 30 that the man was the first vibriosis patient this year and cautioned citizens against consuming shellfish without cooking it thoroughly, and to not expose wounds in seawater.

When the JoongAng Ilbo investigated five hospitals at random in Seoul, it found that four of them did not monitor their patients carefully.

“Some patients smoke, so we ask them to use the smoking room of the hospital, but many refuse to listen,” said a director of the hospital in Dongdaemun. “We can’t be monitoring where they go all day, as there are so many exits to the hospital.

“We sell alcohol to patients if their health looks all right to us,” said the owner of a restaurant located near the hospital.

“I’ve seen patients buy soju and fill their water bottle with it,” said the owner of a convenience store located in the vicinity.

In one university hospital in Seoul on April 30, a female patient was seen sitting outside the hospital’s front door on a bench, eating sushi brought to her by her friend.

Another man, clad in a hospital gown, was seen buying bread from a bakery some 500 meters (1,640 feet) from the hospital. He walked around for some 15 minutes before going back into the hospital. There are no legal measures to stop the patients from leaving a hospital here.

“In developed countries, patients do not just come and go on the hospital grounds,” said Le Sang-il, professor of disease prevention at the University of Ulsan. “If this state of lax monitoring continues, we could have serious medical emergencies concerning infectious diseases. Hospitals must strengthen their regulations on patients.”

“Hospitals will need to increase their security measures to stop the patients from moving freely in and out of hospital without any systemic monitoring,” said Kwon Yong-jin, professor at Seoul National University Hospital in central Seoul.