Wildfires in eastern Korea come to an end

Wildfires in eastern Korea come to an end 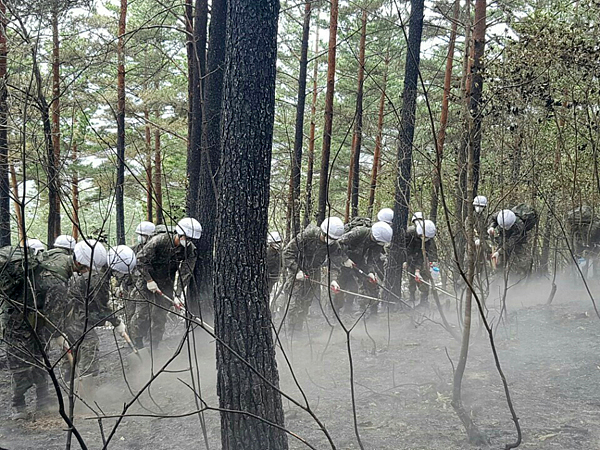 Soldiers are mobilized to completely put out wildfires on a mountain in Samcheok, Gangwon, on Tuesday. [YONHAP]

Dozens of helicopters and about 10,000 people were mobilized to combat the weekend wildfires at Sangju, North Gyeongsang, and Samcheok and Gangneung in Gangwon.

They were completely extinguished as of Tuesday, but in the course of the four days, 808 acres of forest, was burnt down and two people were killed.

Previously, the Korea Forest Service reported the Gangneung fire to be extinguished, but winds whipped the intermittent pockets back to life.

The Korea Forest Service reported the conclusion of firefighting activities with the extinguishing of the Samcheok fire at 11:20 a.m.

The Samcheok fire initially started on 11:42 a.m. Saturday. About 500 acres of national forest were lost as well as an additional 173 acres of private forest.

Likewise, the Gangneung fire was extinguished at 6:34 a.m. The fire initially started on 3:27 p.m. Saturday and lasted for 63 hours.

In the case of the Gangneung fire, an official at the Korea Forest Service prematurely reported the extinguishing of the fire on 6:00 p.m. Sunday, but had to amend this within two hours as the winds fed the flames.

There were 141 acres of land burnt in the fire.

The fires claimed 808 acres of forest and 37 residences in the course of the fire with 79 people rendered homeless.

In comparison, a week-long series of blazes in Gangwon at 2000 saw 58,796 acres lost with 850 people forced to flee the flames.

“As it is forecasted to rain starting from the afternoon, it will be a big aid to the extinguishing of the embers,” an official at the Korea Forest Service said.

“We will carefully watch as to whether the wildfire will reoccur.”

Shin Won-sop, minister of the Korea Forest Service, said the cause of the Sangju fire is thought to be the incineration of waste by a hiker, and the other two are also suspected to be man-made.

In the course of the weekend wildfires, a hiker was reported dead and two others were hospitalized as a result of the Sangju fire.

A helicopter involved in the Samcheok firefighting efforts was forced to make an emergency landing, and is thought to have struck a high-tension power line, leading to the death of Cho Byeong-jun, a maintenance worker aboard the helicopter, on Monday.

The Korea Forest Service will host a funeral today for Cho and he will be laid to rest at the Daejeon National Cemetery.