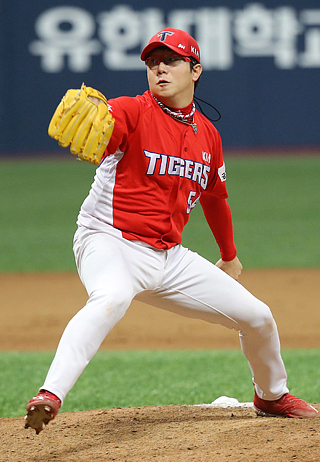 After winning yet another start on Tuesday, Kia Tigers’ left-hander Yang Hyeon-jong is in hot pursuit of multiple pitching records in Korean baseball.

Yang improved to 7-0 in the 2017 Korea Baseball Organization (KBO) season after holding the KT Wiz to three runs over six innings in the Tigers’ 9-4 victory.

He’s one win from matching the KBO record for most consecutive victories to start a season. In 1986, left-hander Kim Il-yoong won his first eight season starts for the Samsung Lions. 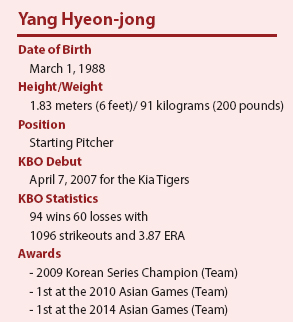 Yang’s next scheduled start will be against the SK Wyverns on Sunday.

Andy Van Hekken of the Nexen Heroes holds the league record by winning 14 straight decisions in a three-month span in 2014.

Yang could also become the fastest pitcher to reach 10 wins in a season. Kim Il-yoong has that record after reaching double digits in 1985.

If nothing else, Yang could establish a career-high in wins this year. He won 16 games in 2010 and again in 2014. Yang has averaged just about 30 starts a season over the past three years and, barring injuries, he could make about 23 more starts in 2017.

Winning 10 of those starts will be enough. If Yang picks up 13 more wins, he will then become the first Korean pitcher to win at least 20 games in a season since Chung in 1999. Chung had one relief win. The last Korean to record 20 wins in starts was Lee Sang-hoon with the LG Twins in 1995.

Thanks in no small part to superior pitching by Yang and other starters, the Tigers are sitting pretty at the top of the standings with a 23-9 record. With Yang, Hector Noesi (1.99) and Im Gi-yeong (1.99), the Tigers are the only club to boast three starters with a sub-2.00 ERA this season.

The three have combined for 17 wins. Yang alone has one more victory than the last-place Lions, who are 6-24-2 (wins-losses-ties) as of Tuesday.