The path toward success

The path toward success 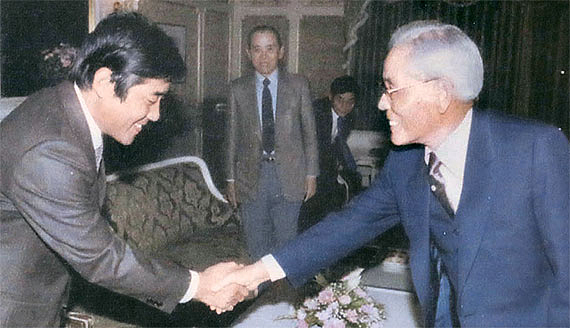 Memory chips may save a Korean economy on the brink of a lengthy period of stagnation. Samsung Electronics will for the first time in 24 years dethrone Intel in the top global rank in semiconductors. Chinese companies have been ascending fast thanks to generous backing from their government, but Korean chipmakers’ position is safe thanks to a so-called “super cycle” in the industry, in which prices are extremely attractive due to heated demand.

Market watchers IC Insights and Gartner Dataquest both foresee explosive expansion in demand for memory chips in areas apart from traditional smartphones and computers. They predict that cloud computing and autonomous vehicles are sucking up memory chips like two new black holes.

Apple, Alphabet, Microsoft, Amazon and Facebook now dominate the top ranks in terms of market capitalization, positions that were traditionally held by merchandise producers and retailers. Microsoft and Amazon are pursuing cloud-enabled technology as their new core business. Their race to expand data centers to stay ahead in a new business environment in which data troves will determine competitiveness has pushed up demand for memory chips by more than 50 percent. Semiconductors are also essential to autonomous vehicles, the Internet of Things and robotics. A self-driving car is actually a powerful computer on wheels.

Korea’s chip-making powerhouse was once on the verge of collapse. There is a photo in the memoir of Ahn Byung-hoon, former vice president of Chosun Ilbo. The picture, taken in 1986, showed Samsung Group Founder Lee Byung-chull explaining the company’s chip-making business to chief editors of major newspapers. Ahn was then the chief editor of Chosun Ilbo.

1986 was a tough year. Lee dreamed of starting a semiconductor business in February 1983. But the market environment was unfavorable. The industry entered a slump in 1984 and the mainstay price of 64k dynamic random access memory (DRAM) chips nosedived to 30 cents by mid-1985 from $4 the previous year. Selling a chip would force a producer to lose $1.40. In 1986, Samsung had to pay Texas Instruments (TI) $85 million for infringing on a patent, which accounted for 80 percent of its operating profit that year. That year was a turning point for other manufacturers too. TI lost the world’s top rank to NEC of Japan. Intel bowed out of the DRAM business.

The local environment was even worse. Semiconductors were frowned upon. When the business caused a cumulative loss of 130 billion won ($114.5 million), the market raised a hoopla about Samsung drowning because of its chip operation. Earlier in the year, the government announced rationalizations of key heavy industries such as automobile, construction equipment and power stations. Semiconductors were initially on the list, but later saved.

The picture in Ahn’s memoir must have been the group’s desperate pitch to save its struggling business. Executives asked reporters to be easy on the business. To 76-year-old Lee and 69-year-old Samsung Electronics Chairman Hong Jin-ki, semiconductors were their ultimate goal as entrepreneurs. Hong died five months later and Lee in November the following year. Lee Kun-hee, who succeeded his father, hit the ceiling when executives recommended the group give up the semiconductor business. Fortunately, chip-making became a profit center from 1988.

An economy is not created and run in a clean room. It must go through bitter trials by the market and survive fierce competition. With a surplus made from memory chips, Samsung Electronics ventured into the mobile phone business in 1988. It incurred losses for seven years and finally hit a jackpot with the Anycall phone in 1994. Companies endure losses if they have firm belief in a product. It’s their determination that makes them winners in the end.

Presidential hopefuls all bragged that they were the best to marshal the country into the fourth industrial revolution. Unlike the past three industrial revolutions, however, the digital age must be led by the corporate — not the public — sector. A company is like a shark. A shark dies if it cannot move. Companies must be constantly on the move and search for new businesses.

The government must not interfere in the industrial transition. What it can do is to remove all regulations that were established for traditional industries and allow companies to freely experiment. It also should reform the education field to breed creativity and entrepreneurship in young minds.

The new president must draw a lesson about industrial policy from the British automobile industry. The British made the first automobile in 1801. But its industry was dragged down by a series of acts in the 19th century that restricted the mechanically propelled vehicles on public roads. The so-called Red Flag Laws required someone to lead automobiles with a red flag to warn any horses and carriages. That made riding a car slower than a horse. Meanwhile, motor vehicles were free to zoom around in France, Germany and the United States. British makers all deserted their country and moved to other markets.