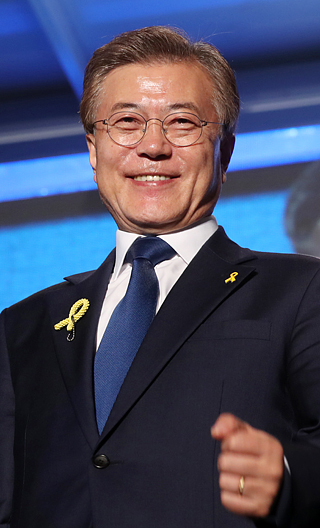 After Korean voters delivered a landslide victory to Democratic Party candidate Moon Jae-in in Tuesday’s presidential election, the question on many of their minds is what economic policies his liberal administration will pursue.

On Wednesday, Moon, in one of his first orders as president, asked the finance minister to assess the country’s job situation and report on improvements that could be made.

He also requested the labor minister begin preparations for a special job creation committee that Moon will directly manage.

In a statement, Moon stressed that creating jobs would be his government’s top priority and said his administration would not wait until a new cabinet is formed to create the special committee. The president has requested the government look into creating a supplementary budget that will: help create jobs and expand opportunities in the public sector; narrow the gap between irregular (or contract) and regular (or salaried) workers; and support small business owners.

On the campaign trail, Moon’s biggest pledge was to create 810,000 public sector jobs over the next five years, the full length of his term in office. In particular, he promised that his government would hire 174,000 civil servants, including 16,700 police officers and 17,000 firefighters, with a 21 trillion won ($18.5 billion) budget.

“For a long time, [the Korean economy] has continuously grown without hiring, and the market has failed to create job opportunities,” Moon said during a presidential debate on April 28. “However, there are some who argue that the private sector should continue to lead in creating jobs.”

As a candidate, he suggested it was time for the government to take charge of solving the country’s unemployment problem. From the legislature, he wants a supplementary budget of 10 trillion won. Moon also plans to tap into tax revenue that exceeded the government’s collection target last year to avoid issuing bonds and expanding the nation’s debt.

Moon, a human rights lawyer who represented student activists protesting military rule during the 1980s, has focused particularly on creating more opportunities for young people. His jobs motto on the campaign stump was “building a country that supports young people and where young people can rise again.”

The unemployment rate of Koreans aged 15 to 29 has reached 10.8 percent. Although this is lower than the rate of other advanced economies including Europe, Japan and the United States, the figure is concerning for many.

In the next three years, Moon hopes the public and private sectors will temporarily expand the percentage of its hires that comprise young people. In the government, he wants to raise it from 4 to 5 percent, and for companies with more than 500 employees, the goal is between 3 and 5 percent. Additionally when a small or midsize company hires three young workers, the government will provide the full salary of one of the new recruits for three years.

Other related policies include narrowing the wage gap between irregular workers and regular workers, and raising the minimum wage to 10,000 won per hour.

One of Korea’s biggest inequalities is the gap between profit made by small and medium-sized enterprises and large conglomerates. The government’s Small and Medium Business Administration, an agency under the Ministry of Trade, Industry and Energy, is in charge of forwarding the interests of small companies.

Moon Jae-in has pledged to make the agency its own ministry under his administration.

This would give it the authority to design policies related to small businesses. The agency currently has no power to propose bills to the legislature, which only ministries can do. There is also significant overlap between the agency’s work and those of departments in other ministries.

“A new small and midsize venture ministry will be created that not only will handle related policies but also lead in the fourth industrial revolution,” Moon said in a campaign speech on April 10.

In addition to greater support for the little guy, Moon is likely to push for reform in the governance structure of large companies, an issue that came to the fore after the corruption scandal involving Moon’s predecessor, President Park Geun-hye, and her shadowy confidante Choi Soon-sil.

Analysts have blamed the misdeeds on poor corporate governance and high concentration of decision-making power in the top rung of Korea’s family-owned conglomerates.

In a report released Wednesday, Goldman Sachs noted corporate governance reform as one of two key policy implications to come out of Moon’s election, the other being tax hikes.

“We expect corporate governance will likely continue to improve along with broad-based support for the need for better governance as a sound business strategy,” said Kwon Goo-hoon, an analyst at Goldman Sachs.

Moon has promised to implement a legal system where individual shareholders can file a lawsuit against a company that suffered losses from illegal activity by its affiliates. While such a change could lead to a sharp increase in lawsuits, it also has the potential to improve transparency at companies.

Another piece of reform is an online system where shareholders can cast their vote without having to physically attend a shareholders meeting. This policy has been under discussion for years but failed to get off the ground. It promises to ease the burden on minority stakeholders who might have trouble attending the meetings because many companies hold them on the same day.

This is not to say Moon is completely anti-business. He has pledged to create an environment where companies can thrive under the so-called fourth industrial revolution, where technologies like artificial intelligence and the Internet of Things are generating new industries and jobs.

His policies include creating a committee directly under his management that will handle fourth industrial revolution-related issues.

The looming question for the next five years is whether Moon Jae-in’s policy proposals will be feasible and effective.

Some of his goals, like creating 810,000 public sector jobs, have been considered temporary solutions that fail to tackle the fundamental issue at hand. Skeptics have questioned how Moon plans to create so many public sector positions with just a 21 trillion won budget.

The Moon camp argues his policies will be financed by additional taxes collected from conglomerates and the wealthy. One of his administration’s key proposals is raising the corporate tax rate on conglomerates with income of over 500 billion won from the current 22 percent to 25 percent. This is expected to raise additional revenue of 4.6 trillion won annually.

Income taxes on individuals who make over 300 million won a year will likely be raised from 40 percent to 42 percent, which will translate to 1.2 trillion won in additional revenue.

Critics of Moon contend that his policies focus too much on redistribution of wealth than economic growth. Some argue he should be focusing on support for small and midsize businesses, which make up 88 percent of the country’s jobs.

“It’s not that there are no jobs for young people,” said Bae Kiu-sik, a senior researcher at the Korea Labor Institute. “Rather, the problem lies in the lack of jobs that young people want to do.”

The new government also faces systemic problems in Korea’s economy. Although recent indicators like double-digit export growth, a record-breaking stock market and improved consumer confidence are suggesting some recovery, the country still has to face the reality of a shrinking birthrate and aging population that will require more welfare spending.

Already, the working population has started dropping this year after peaking last year.

“In 10 years, there’s a strong possibility that the lack of labor will be a major obstacle in the nation’s growth,” said Lee Geun-tae, a senior researcher at LG Economic Research Institute. “We need to prepare for the dearth of labor by raising the quality of young talent and consider hiring more high-quality foreign workers.”

The research institute recently released a projection that economic growth in five years’ time will drop to 1.9 percent. The Bank of Korea estimates potential growth will be in the 2 percent range, a drop from the early 2010s when it was still at 3.6 percent.

And while Moon has promised to support industries that are part of the fourth industrial revolution, automation is a double-edged sword. According to a study by Deloitte, while new industries will create as much as 680,000 jobs, a maximum of 1.64 million jobs will be lost by 2025.

Other issues that Moon will have to face include China’s economic retaliation against Korean companies in protest of a controversial U.S. antimissile system installed on Korean soil and rising pressure from U.S. President Donald Trump to renegotiate a bilateral free trade agreement.

While Moon has criticized China’s trade action, he hasn’t come up with a specific policy to resolve the issue.

And on the free trade deal with the United States, Moon has been somewhat vague, only stating that he wants to strengthen strategic ties with the U.S. based on military cooperation and free trade.