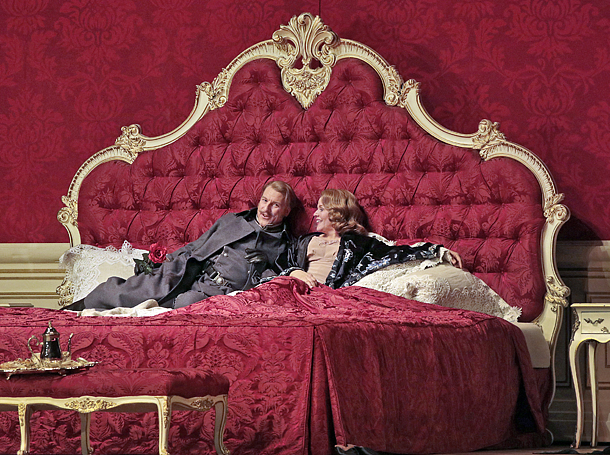 NEW YORK - While soprano Renee Fleming bids a poignant and elegant farewell to a signature role at the Metropolitan Opera, a young bass is stirring up a storm as her far-from-dignified country cousin.

He’s Guenther Groissboeck, a 40-year-old singer from Austria who is starring alongside Fleming in Richard Strauss’ “Der Rosenkavalier” as Baron Ochs, a character he cheerfully describes as “a totally opportunistic, non-empathetic, selfish person who thinks he’s God’s gift to the world.”

And yet, Groissboeck said in an interview backstage at the Met, there are times when he can sense the audience identifying with Ochs, despite, or perhaps even because of, his crude behavior. One such moment comes in Act 2, when Ochs meets the merchant Faninal and his daughter, Sophie, whom he has arranged to marry. Ochs treats Faninal with the contempt of a member of the aristocracy for a tradesman, and manhandles Sophie as if she were a piece of goods.

“He behaves absolutely inappropriately,” Groissboeck said, “but you feel the audience thinking, ‘Oh, I would like to treat my boss in my office tomorrow a bit like this.’ It’s the tiny moment where you feel the basic instinct or the hidden desires of people.”

Often the character is played by an older singer as what he calls “a fat clown, a ridiculous guy.” But Groissboeck is so dashing that it’s easy to understand why Strauss and librettist Hugo von Hofmannsthal initially thought of making him the title character. Audiences will get a chance to see for themselves on Saturday when the final performance of “Der Rosenkavalier” is broadcast to movie theaters worldwide.

The lows and the highs

Groissboeck, who first sang the role in Salzburg in 2014, said he was drawn to it in part because Ochs comes from the same region of Lower Austria where he grew up and speaks in a dialect with which he is familiar.

“But I was very afraid of the vocal demands because it’s almost unsingable,” he said. “It has everything. In the very bottom you have a low C, and then you have incredible high notes, including an F over nine bars.”

Groissboeck describes himself as a “basso cantante,” a higher, more lyrical voice than a “basso profondo,” who is strongest at the bottom of the range. What he may lack in amplitude at the low end, he makes up for with power to spare at the top.

Hail and farewell? Maybe not.

Fleming, a reigning star at the Met since her debut in 1991, is winding down her operatic career at age 58. Though she has said she may take on new roles, she is retiring those with which she has been most associated, including the Marschallin in “Rosenkavalier.”

Also bidding farewell to her role - though hardly to her career - is mezzo-soprano Elina Garanca, who is portraying the title character, Octavian, for the last time. Soprano Erin Morley completes the trio of female stars as Sophie.

Where to see it

“Der Rosenkavalier,” the final HD broadcast of the Met season, will be shown starting at 12:30 p.m. EDT on Saturday. The production is by Robert Carsen, who has updated it from 18th-century Vienna to the eve of World War I, and the conductor is Sebastian Weigle. A list of theaters can be found at the Met’s website: www.metopera.org/hd .