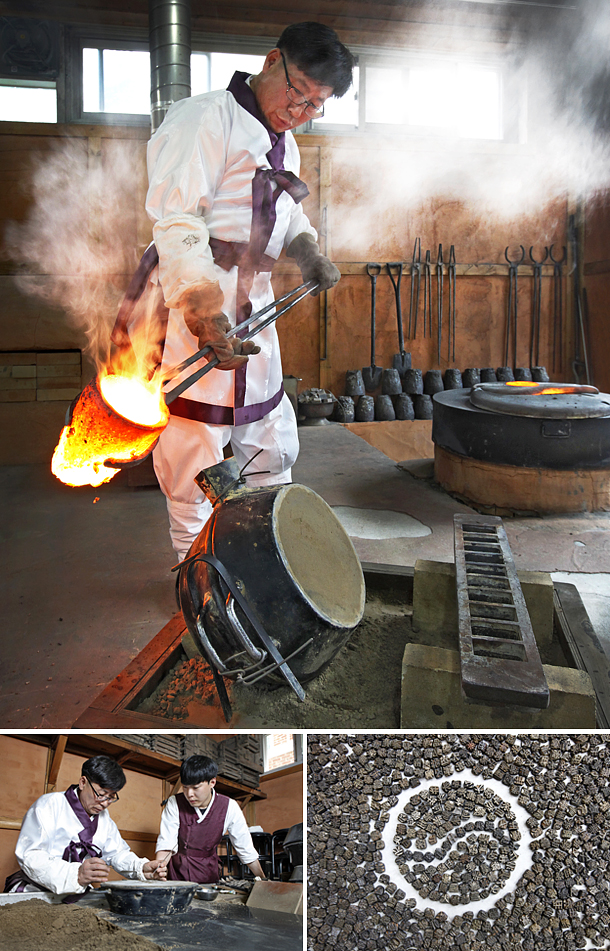 Mankind is constantly evolving, even at this moment. The advent of computers and the internet made real-time and exponential data searching possible. This information revolution, much like the “Third Wave” Alvin Toffler proclaimed, has formed the basis for human evolution and that evolution is much faster than what we’ve previously experienced. Some suggest that the driving force behind this exponential rate of growth is thanks to printing. In Korea, the invention of geumsokhwalja, or movable metal type, made possible the mass distribution of information by allowing the printed publication of books.

“Jikji Simche Yojeol,” published in 1377 during the Goryeo Dynasty (918-1392), is the world’s first known use of movable metal type - 78 years ahead of Gutenberg’s bible, which was previously recognized as the first metalloid type. UNESCO confirmed “Jikji” as the world’s oldest metal type print in September 2001 and it was registered as part of the Memory of the World, with the second volume of a two-volume book stored in the National Library of France.

For five long and arduous years, from 2011 to December of 2015, Lim re-created the movable metal types in their original form. Using a wax casting method, which is where letters are carved into beeswax and wrapped in soil, later melting the wax and pouring melted steel into the empty spots, Lim restored 6,000 to 7,000 letters a year.

Lim was born in Yeonpung-myeon, Goesan-gun, North Chungcheong, in 1963 and grew up in difficult circumstances. Due to financial reasons, he wasn’t able to continue his studies. He headed up north to Seoul, where he took on a number of jobs requiring physical labor. That’s where he stumbled upon someone that told him, “You’re going to make a living off of letters.” This is a memory he cherishes even to this day.

In 1984, he found himself lost in engraving characters and illustrations with a chisel in hand. In 1992, he headed down to his hometown and established Museol Jogaksil, a sculpture manufacturing company, focusing on wood engravings. It wasn’t until 1996 that he became interested in metal types, when he watched a TV program featuring metal type creator Oh Kook-jin showcasing the manufacturing of metal types. The scene of Oh pouring molten steel into a molding box and producing metal types by hitting the box after it cooled down fascinated Lim. As if creating something out of nothing, he was absorbed in the beauty of the creation process and later was accepted as Oh’s pupil. In 2009, after wrestling with the craft for 12 long years, he was able to become the second modern metal type maker.

In restoration of the ancient types, he adheres to the ancient ways. In order to use the beeswax casting method, he bred his own bees, made his own molding boxes by carving each character into them and also polished each metal types. This was all done following traditional methods.

The perfect restoration of several thousand metal types in a limited time period was an enormous burden and resulted in colossal stress for Lim. Not only Lim, but his mother, wife, and son, Gyu-hyeon, who is also his apprentice, went through all-nighters for the project. After three years of trial, experimentation and countless errors, Lim was able to perfectly recreate the metal types that he wanted to restore for so many years.

After giving his final report in the last briefing session after five grueling, rigorous years, he suddenly collapsed, and his body paralyzed. Not knowing the cause for the paralysis or the sudden collapse, he laid in a hospital bed for 15 days. Although his body was severely damaged in the process, he was brimming with pride at being able to protect and restore a Korean treasure.

He has one final wish, which is to restore an archaic Korean text, since he was able to successfully restore the oldest metal type print in Chinese characters, “Jikji.” The Korean text he now wishes to restore and publish by re-creating metal types is “Wolincheongangjigok,” written by King Sejong the Great during the Joseon Dynasty in 1447. The book, designated Korea’s National Treasure No. 398, is not the first, but is nevertheless a representative document printed through movable metal types, which is the reason why many are anticipating his next project.

The first process is the selection of letter style, according to the book that one wishes to print. Second, the letters are pressed on a solidified beeswax board. The third process is the manufacturing of the prototype types. Using carving knives, the creator embosses the characters on the beeswax board. The prototype letters are later stuck onto a metal branch. A mixture of clay and rock are the ingredients for a mold frame. Molten steel, melted at 1100 to 1200 degrees Celsius (2012 to 2192 degrees Fahrenheit) is poured into the mold frame. After it has cooled down, the fresh metal types are arranged to spell out the content of the print. Ink is then applied over the metal types, and then hanji, traditional Korean paper, is pressed against them to print the set of characters.