The ‘show’ must stop

The ‘show’ must stop 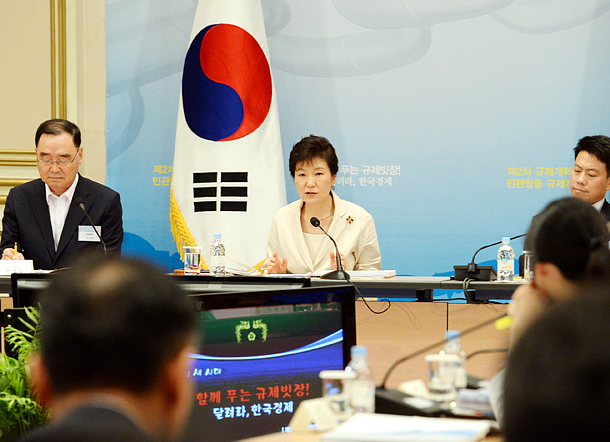 On the historic day of electing the new president, I was reminded of a scene from three years ago. On March 20, 2014 during the Park Geun-hye administration, a debate over regulatory reform was televised live nationwide for seven hours.

Selected businessmen were on stage and explained what they wanted, Park Geun-hye scolded them severely and officials busily wrote down her orders. It was a show that Park staged to demonstrate to people, “I am personally taking care of the economy.” Lee Seung-cheol, then-vice chairman of the Federation of Korean Industries, appeared in a supporting role and said that Galapagos and Active X regulations should be removed. Around this time, Park described the regulations as “cancers” and “enemies to crush.”

In retrospect, she rolled out many economic policies aside from regulatory reform such as the three-year economic innovation plan. But there have been few results. The majority of reform bills, revisions on the Labor Standard Act and Employment Insurance Act, didn’t pass the National Assembly. Park personally pushed for a “creative economy,” which was at the center of her abuse of power, and it created more trouble than results.

Aside from having her friend Choi Soon-sil involved in state affairs, the list of policy failures by the Park administration is lengthy. What is the worst catastrophe? I believe that Park was wrong to think that she could do as she wished and the nation would follow. The staged show that illustrated her wrong mindset was the televised debate on regulatory reform.

Korea Chamber of Commerce chairmen visited each party and delivered economic agendas to the candidates on March 22. The noteworthy point was not the nine specific suggestions that combined the opinions of conservative and liberal scholars but the comment asking for teamwork, communication and collaboration among the government, politicians and businesses. The industries are sharing accountability for national development, so they desperately asked the new leader to listen to their voices instead of going their own way.

The external environment is aggravating, and Korea has had a long leadership vacuum. The new president may be tempted to display strong leadership, especially as there is so much work to be done due to Park’s failure. But most economic policies, including regulatory reform, may not be so clear and straightforward. There is one thing to be learned from the failed presidency: Being president is not a one-man show.