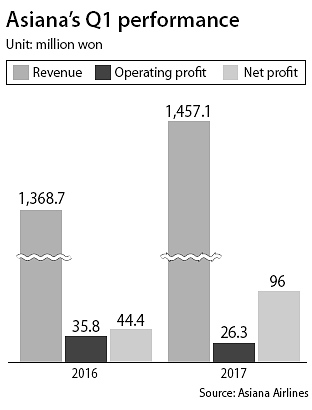 Asiana Airlines said Wednesday its net profit more than doubled in the first quarter from a year earlier on currency gains.

Net profit for the three months ended March 31 jumped to 96 billion won ($85 million) from 44 billion won a year earlier, the company said in a statement.

“The won’s strength against the dollar sharply reduced the value of dollar-denominated debts in the first quarter, giving a boost to the quarterly bottom line,” a spokesman said.

But rising oil prices and lower travel demand from China amid a row over the deployment of the Terminal High Altitude Area Defense (Thaad) system cut into operating profit.

To offset declining travel demand from China, Asiana has increased services to Japan and Southeast Asian countries. It plans to operate the A350 jet initially on the Incheon-Manila route from Monday to strengthen customer service.

China banned the sale of travel packages to Korea on March 15 in retaliation against the Thaad deployment. It has opposed the U.S. antimissile system as it believes its radar system could be used against it though Seoul and Washington have said Thaad is purely aimed at countering missile threats from North Korea. YONHAP