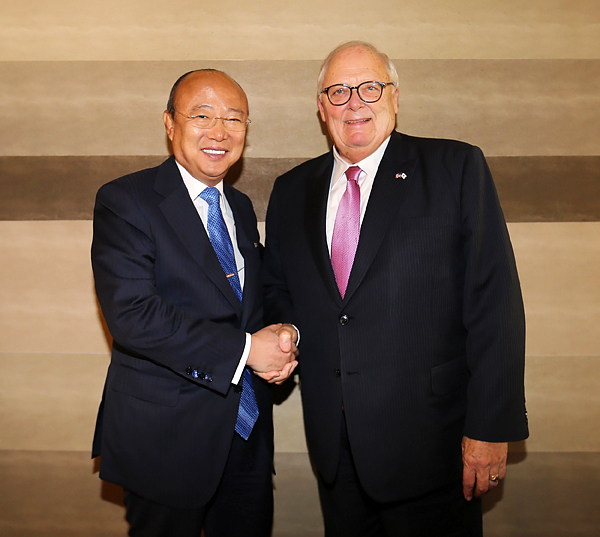 Hanwha Group Chairman Kim Seung-youn met with the president of the Heritage Foundation, a conservative Washington-based think tank, on Tuesday to discuss economic issues between Korea and the United States.

Kim and Edwin J. Feulner Jr., the think tank’s president and an adviser to U.S. President Donald Trump, have maintained a close relationship over the past 30 years.

The major focus of their discussion on Tuesday included the two countries’ free trade agreement, which has surfaced as a controversial issue in the United States, and geopolitical tension on the Korean Peninsula.

In the United States, Trump has been calling for renegotiation of the free trade pact.

“There are political tensions in Northeast Asia, and we ask for your support in advancing the cooperative relationship between Korea and the United States,” Kim said.

According to Feulner, the Trump administration is already putting effort into improving the relationship between Korea and the United States, saying it values the partnership.

The Heritage Foundation was established in 1973 to promote conservative public policies. Feulner is a founding member.

The think tank has recognized Kim’s efforts to boost economic relations between Korea and the United States, naming its second-floor conference center at the Heritage Building in Washington, D.C., after Kim in 2011.

Kim was also invited to Trump’s inauguration ceremony in January through Feulner but declined to attend due to health issues.

The last meeting between Kim and Feulner was last October.