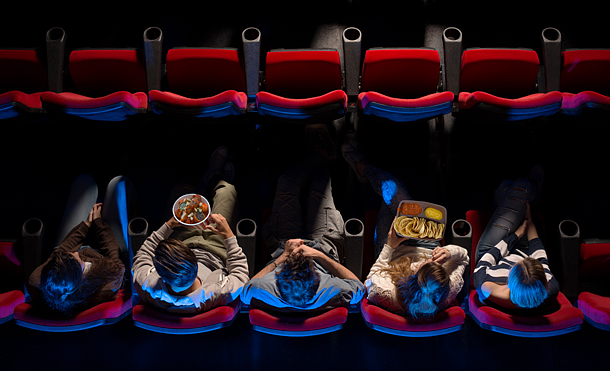 For some moviegoers, snacking on food while watching a film is as natural as breathing. For others, it’s a nuisance.

Whether eating should be allowed in theaters has long been a cause celebre in Korea, which sounds silly given cinemas around the world sell confections in their lobbies.

But in Korea, people can bring more than just popcorn and candy into theaters. A 2008 Fair Trade Commission ruling stipulates that movie theaters cannot bar their customers from taking outside food with them, so multiplex chains like CGV, Lotte Cinema and Megabox allow their patrons to bring all types of food, whether purchased at the cinema or not, into the theater as long as it does not have a strong smell or make too much noise.

For moviegoers, this means putting up with the stench of chicken, hot dogs, fries and the like. For movie theaters, it means their lobby confection stands are also competing with the snack cart outside their door. 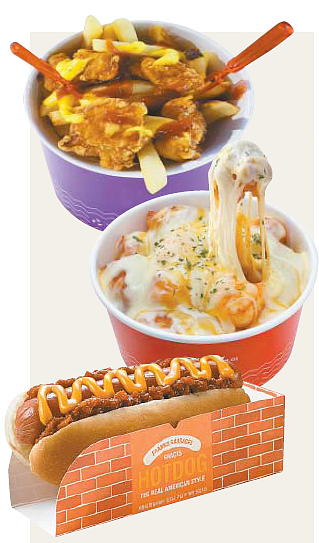 From top to bottom, chicken and chips from Megabox, fritters in chili paste from CGV and a chili cheese hot dog from CGV. [CJ CGV, JIN MIN-JI]

So multiplex chains have gotten creative with their food options, with fried chicken and chips served at Megabox and sausages wrapped in pretzels sold at Lotte Cinema.

Most recently, CGV has added tteokbokki (Korean rice cakes in spicy chili paste) to its list of odd offerings through a partnership with Korean street food franchise Jaws Food.

CGV, though, is hesitant to call the dish tteokbokki. Traditional tteokbokki is known for its strong smell and thin soupy sauce that is prone to spill, neither of which are particularly good qualities for movie snacks to be enjoyed in the dark.

CGV’s “tteokbokki” consists of mini rice cakes and fritters drenched in the spicy sauce that Jaws is famous for. One can add melted cheese on top for an additional 1,000 won ($0.85). The item is currently being test-served in 30 CGV theaters. The audience reviews, though, are mixed.

“Before the purchase, I was a little concerned about spilling the soupy sauce,” wrote one blogger on the portal site Naver. “But when I opened it, there was not that much to spill because only the right amount of sauce to soak the fritters was provided.

“The smell wasn’t too bad, either,” the blogger added.

Another user, on the other hand, wrote, “Selling tteokbokki at the cinema has gone too far. I’d hate to even imagine the smell and chewing sound. And what if people spill it? I’d rather watch video on demand at home.”

CGV for its part seems to be soldiering on.

“We have been continuously receiving requests from our customers for more light snacks,” an employee at the company said, “so we collaborated with Jaws Food to specially develop the new menu item. Since it contains neither much sauce nor a strong smell, we believe moviegoers can enjoy the dish without much inconvenience.”

But, the employee noted, the theater chain does request moviegoers finish the snack in the lobby before entering the theater. A strange request anywhere else for sure, but at Korean cinemas, where the number of patrons has remained stagnant, making some extra money off food has become a norm.

Not all movie theaters, though, are becoming makeshift eateries. Some film houses like Cinecube are bucking the trend, and they’re benefitting from it. Film connoisseurs unhappy with munching at the movies are instead heading to these smaller cinemas, where food and drinks are banned.

Cinecube in Jongno District, central Seoul, only allows patrons to bring in bottled water. Though some complained about the rule when the theater first opened in 2000, it’s become such a fixture that customers have come to expect it.

“We don’t let moviegoers bring food into the theater to help other audience members fully concentrate on the film,” said Choe Hwi-byeong, who used to work as a manager at ArtNine and now works at Forest Art Cinema. “We don’t want our audiences to be disturbed by others who make noise eating popcorn or burping after drinking Coke.

“In fact, that is what has set smaller cinemas like ours apart from bigger multiplexes.”