‘The government should do the things that corporations cannot’

‘The government should do the things that corporations cannot’ 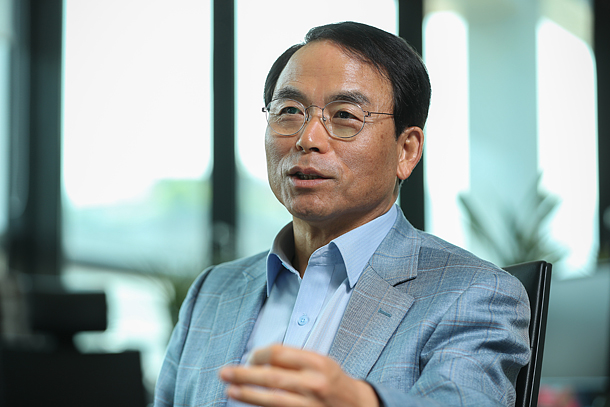 The results prompted an interview with Chin Dae-je, former CEO of Samsung Electronics and former Minister of Information and Communication, and a renowned IT maverick, to discuss the ongoing development in the Korean chip-making industry.

After earning his doctorate at Stanford University and doing a stint at IBM in the United States, the 65-year-old returned home to join Samsung Electronics in 1985. He then gained the nickname Mr. Chips for his notable contribution to Korea’s semiconductor industry.

He went on to establish SkyLake Investment, a private equity firm that specializes in investment in IT and manufacturing sectors, in 2006. The company is managing almost 2 trillion won and owns a governing stake in some 10 companies. He also founded and runs CT2P Solutions, a company devoted to solutions to connect everything, and has published several books, including “Manage Your Passion.”

Aside from being a businessman, Chin is spending a lot of time these days giving lectures on the fourth industrial revolution at the Korea Advanced Institute of Science and Technology and in front of entrepreneurs.

Q. Can you define the so-called “semiconductor Korea”?

A. Koreans have a deep-rooted habit of taking their shoes off when entering the house. Their dexterity enables them to freely use not only wooden but also metal chopsticks. Such features match well with semiconductor production, of which the key lies in clean environment and precision process. Koreans may not be so good at creating something out of nothing, but they are good at things involving clear goals, such as memory semiconductors, which requires constant improvement of precision process technologies. We have the semiconductor DNA. When Samsung Electronics outpaced Japan in the memory sector in 1993, it was such a huge event. It instilled the confidence in Koreans that we can be the world’s No. 1 in manufacturing. Twenty-four years have passed already.

The top post that Samsung Electronics and SK Hynix combined assume in the memory sector will sustain for the coming years. It’s not too farfetched to say that the chip business is the most successful one since ancient Korea was born.

Both Samsung Electronics and SK Hynix saw their operating profit ratio amounting to 40 percent in the first quarter. Their competitors won’t just sit and watch such a miraculous outcome. Will China catch up soon?

China may be pressed by Korea but it won’t be easy for them to catch up within a short time. The chip business requires a huge budget: installing a single production line costs over 10 trillion won. Even though China has been pushing into the semiconductor business, they need an estimated 300 trillion won investment, I heard. That’s not a small amount, even if they have ample cash. Demand for memory chips is growing rapidly in China as various IT and electronic industries leap forward. They won’t feel so good about having to import Korean memory chips amid trade sanctions imposed by the Chinese government in the aftermath of the Thaad missile system deployment.

Is the life cycle of semiconductors short, and is this a high entry barrier?

I still feel overwhelmed when recollecting those days when I successfully developed 16 megabytes and 64 megabytes DRAMs — for the first time in the world. But such technologies are incomparable to those of today. Now DRAMs have gigabyte capacity. Non-volatile flash memory chips have dozens of gigabytes of capacity.

Cutting-edge technologies get renewed every few years, meaning old technologies and products easily become obsolete. That’s different from traditional industries. In shipbuilding, for instance, the small- and medium-sized vessel category that Hyundai Heavy Industries has given up due to low productivity can be taken over and be revived by Chinese latecomers. But that is not the case with semiconductors. In Japan, DRAM production is entirely halted. Former memory chip strongholds such as Toshiba and Hitachi joined forces to form Elpida Memory back in the early 2000s but the company was beaten by Korea and was later acquired by Micron Technology of the United States in 2012 after a court receivership.

Do you think we are now in the heyday of semiconductors or is this another leap propped up by the fourth industrial revolution?

When the fourth industrial revolution matures further, the demand for chips will achieve the so-called “quantum jump.” Once there were over 10 memory chip producers but after two decades of playing chicken we have only five, including Samsung and SK.

Where do you think Korea’s competitiveness lies?

I won’t mention individual production technology, but Samsung’s strength lies in the fact that it is the only company in the world that produces smartphones with numerous components made from its affiliates. The company is able to hold out crisis, given it has different innovative products according to different processes. Finland’s Nokia, once the world’s largest feature phone producer for over a decade, had its earnings nose-dive with the advent of smartphones and was forced to shut down its phone business in 2013. The main cause was that it relied entirely on external component producers such as chips and displays.

Samsung isn’t too good at creating cutting-edge software or something that did not exist before, unlike Apple. But innovation can happen with hardware too. Technologies to improve devices’ resolution or to speed up technology processing will earn you big money. That’s why Samsung, which churns out computers, smartphones as well as white goods, is strong.

Bidding for buying Toshiba is hot.

I hear the price is over 20 trillion won and it’s an overwhelming amount. I hope those companies wishing to buy Toshiba keep in mind that its flash memory chip technology isn’t that cutting-edge. The company’s application processor is weak, according to industry experts’ assessment. The buyer must also adjust to Japanese traditional corporate culture, in which life-long employment is a norm. It may not be easy to deal with human resources matters including restructuring.

What will be the role of the government in the fourth industrial revolution?

The government should take care of the things that the corporate sector cannot manage.

Who is leading artificial intelligence research in Korea? Google is touting its AI technology after developing AlphaGo but conglomerates in Korea have yet to jump into the sector. State-run research institutes should join forces with private companies to work on AI. The same is true with drones and robots.