From abject poverty to the Blue House

From abject poverty to the Blue House 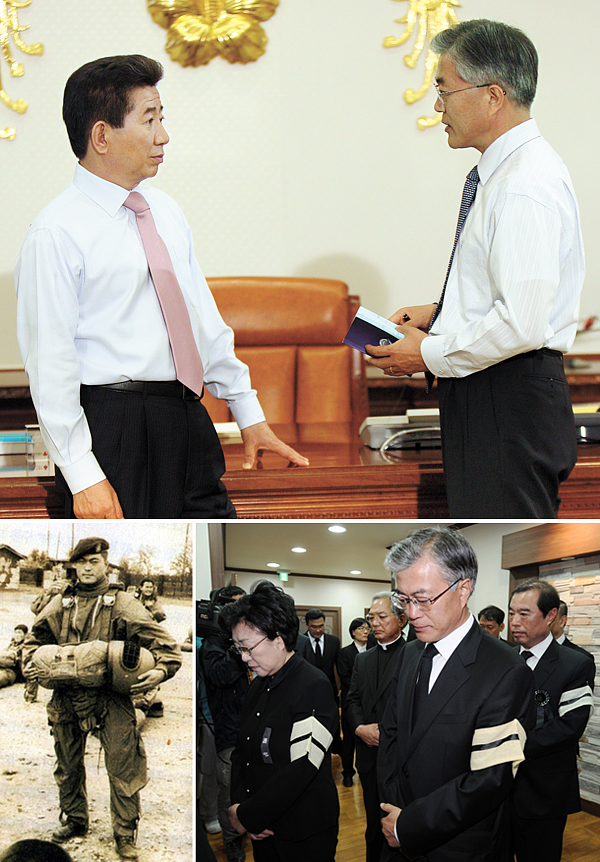 Top: In the presidential office on May 3, 2007, President Roh Moo-hyun, left, talks with Moon Jae-in, right, presidential chief of staff. Above left: Moon serving in the special forces. Above right: Moon organizes a funeral service for the late President Roh in May 2009. [JOONGANG PHOTO]

Moon Jae-in of the liberal Democratic Party was elected Korea’s 19th president in a change of power to the liberal force after nine years of conservatives’ grip on power in what will be the beginning of a dramatic departure from government policies in the past decade on areas ranging from economy, national security to North Korea.

Moon achieved a landslide victory by earning 5.56 million votes more than the LKP’s Hong, the largest gap in Korea’s presidential election history. With Moon, a former human rights lawyer and the former presidential chief of staff for Roh Moo-hyun, Korea is set to experiment on a number of policies that stand in sharp contrast to the two former conservative governments of Lee Myung-bak and Park Geun-hye, especially with respect to North Korea.

“Starting tomorrow, I will become a president of all the people,” President Moon said in his victory speech early Wednesday to address his supporters in Sejongno Park, central Seoul. “I will serve all Koreans, including those who voted and did not vote for me, to be a president of unity. I will make a country that serves justice and the rule of law and where the people’s will triumphs.” 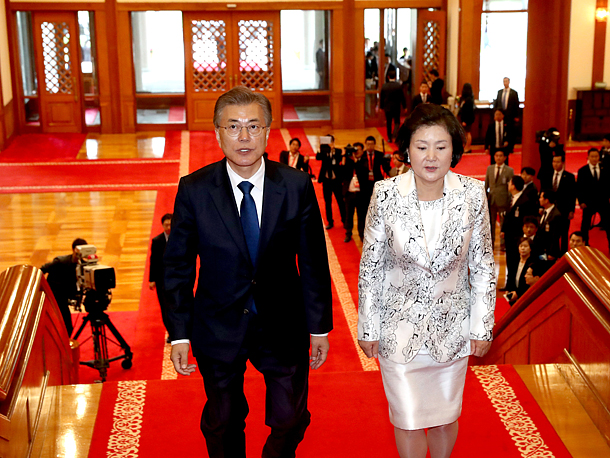 Moon later said he regretted not being better prepared.

“I can’t deny the fact that I was not desperate enough to win the election,” said the then-defeated candidate in his memoir “1219: The End is the Start of Beginning” published in 2013. Moon attributed his defeat to his lack of preparation and ability as presidential candidate in the book.

In February 2015, he threw his hat into the ring after two years of absence from political spotlight to become the DP chairman. Moon took the helm of the party by defeating Park Jie-won, who later left the party to join hands with Moon’s rival Ahn Cheol-soo in the People’s Party. For the next 10 months, Moon was able to sharpen his political skills as the leader of the country’s largest opposition party, but it was not without fierce opposition from those who had opposed him within the party. A group of 10-some lawmakers abandoned the DP in protest of the way Moon steered the party, calling his leadership style “intolerant” and “high-handed.” At the forefront of such a defection was Ahn, who finished the May 9 election in a distant third with 21.4 percent.

Overcoming such challenges to his leadership, Moon was able to hand his party a surprise victory in the April general election last year, making it the party with the largest number of parliamentary seats. From that point on, people began to recognize Moon having a real shot at becoming the country’s next president, who would end a decade of conservatives’ grip on power.

The political landscape began to unravel rapidly with the unfolding of the Choi Soon-sil scandal that implicated senior Park administration officials as well as President Park herself on accusations that Park had extorted millions of dollars from conglomerates in exchange of policy favors in collusion with Choi. Joining street protests with candles in his hands demanding Park step down, Moon was put right back into the center of political drama, cementing popularity among voters disheartened and frustrated with the conservative government.

Riding on the momentum created by the political up-and-down that ultimately dragged Park from power and led to the country’s fist snap presidential election, the former human rights lawyer handily won the DP primary by defeating South Chungcheong Governor An Hee-jung and Seongnam Mayor Lee Jae-myung. While concerns arose that the party suffered from internal rift from a hard-fought race, Lee and An threw their support behind the party candidate and asked voters to back him on Election Day in a display of party unity. After 22 days of hard campaigning that included six televised debates, the former Special Forces solider won the election Tuesday, 15 years after his mentor Roh did.