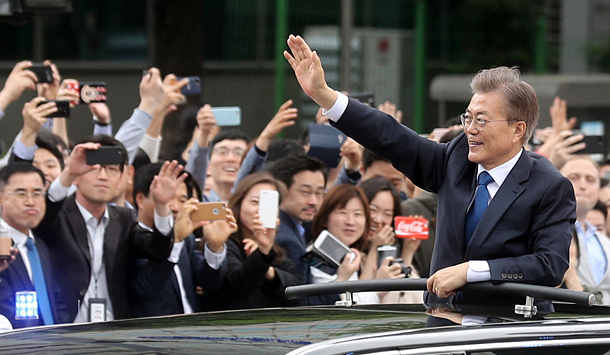 President Moon Jae-in waves toward citizens from a moving vehicle at Gwanghwamun Square Wednesday afternoon after he was sworn into office. [YONHAP]

President Moon Jae-in said in an inaugural speech Wednesday that he will visit Washington with speed if necessary to maintain peace on the Korean Peninsula, adding that Beijing and Tokyo could also be on the itinerary.

On the idea of a summit in North Korea, the new president said he could do it “if circumstances permit” - backpedaling from a remark in December that Pyongyang would be the first destination he would visit if elected president.

“I will act fast to solve the security crisis and work hard for peace on the peninsula,” said the new president in a speech before an audience of about 400 during a brief inauguration ceremony at the National Assembly Wednesday. “If necessary, I will fly to Washington as well as Beijing and Tokyo. If circumstances permit, I will also make a visit to Pyongyang.”

A couple of hours later, Suh Hoon, who was nominated by Moon Wednesday to head the National Intelligence Service (NIS), told reporters at the Blue House that while it was premature at this point to discuss an inter-Korea summit, he considered such a meeting “necessary” for the new administration.

“[A summit] could give us a gateway to solve North Korea’s nuclear problem, which is an urgent security threat to us,” said Suh, adding that Moon could travel to Pyongyang if the “right conditions” to ease tensions on the peninsula were met.

In a December interview with the JoongAng Ilbo, Moon said North Korea would be the first country he visited if elected president, and that he would explain his reason for doing so to the U.S, Japan and China. Traditionally a South Korean president first visits Washington to show his or her commitment to the South Korea-U.S. alliance.

Moon’s remarks in the interview worried national security-conscious conservatives about his attitude toward the alliance and reinforced the idea that he was anti-U.S. and pro-North.

In Wednesday’s inaugural speech, Moon said he would strengthen the alliance. But he also promised a “serious negotiation to solve the Thaad problem.”

Thaad is an acronym for the Terminal High Altitude Area Defense system designed to shoot down missiles form North Korea. China sees Thaad as an American attempt to monitor its airspace with the penetrating radar system that comes with it.

The Thaad battery was hurriedly installed in Korea during the snap election campaign.

Moon was firm during the campaign that his administration would review the Thaad issue, and said its deployment should be approved by the National Assembly - a sharp departure from the attitude of the previous administration.

On the economic front, Moon reiterated his promise to reform Korea’s conglomerates, or chaebol, for the sake of transparency and an end to corrupt relations between the political establishment and business groups.

Moon’s inauguration came just four hours after he became president, at 8:09 a.m. when the National Election Commission officially declared him the victor in the May 9 snap election. Out of 32.8 million votes cast on Election Day and during a two-day early voting period last week, Moon received 41.08 percent, or 13.4 million, of votes cast, handily clinching the office he had failed to win in 2012. Voter turnout was 77.2 percent, the highest figure since the 1997 presidential election, which saw an 80.7 percent turnout.

Moon’s first presidential activity was to receive a briefing by Lee Sun-jin, a four-star general and chairman of the Joint Chiefs of Staff, at his residence in Hongeun-dong in western Seoul Wednesday morning over a secure communication line. The general told the new president the military was maintaining solid readiness against potential military provocation from across the border. Moon told the general to keep up the military’s readiness.

Moon then went to Seoul National Cemetery to pay his respects to national heroes. Moon then went to Yeouido to visit the headquarters of rival parties to make good on a campaign promise to work toward national unity.

Moon sat down with Liberty Korea Party chairman Chung Woo-taik at his party headquarters. “While we competed hard during the campaign, we must strive for unity for the sake of the national interest,” Moon told the LKP leader.

Chung asked Moon to lead the country with a form of politics marked by communication, compassion and tolerance. Moon also visited offices of opposition party leaders at the National Assembly to continue his outreach before attending the inauguration ceremony at 12 p.m.

Former President Park, who was removed from office in March after being impeached in December, never visited opposition party headquarters or party chief offices at the National Assembly during her time in office.

While Moon was officially inaugurated Wednesday, he will commute to the Blue House from his Hongeun-dong residence for the next couple of days since the Blue House residence is under remodeling.