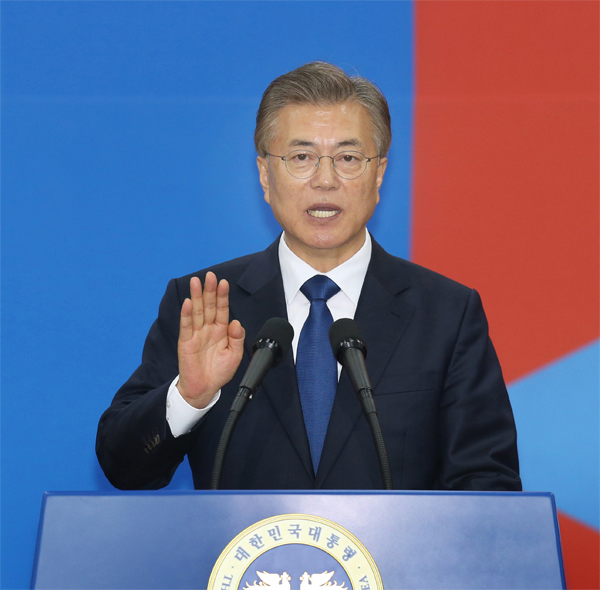 President Moon Jae-in takes the oath to be inaugurated the 19th president of the Republic of Korea at the National Assembly on Wednesday. [YONHAP]

President Moon Jae-in said Wednesday if conditions are right then he will visit Pyongyang in order to resolve the nation’s security crisis.

Moon was sworn in as the country’s 19th president at a brief inauguration ceremony at the National Assembly around noon. After taking the oath, Moon issued a statement to the nation in which he stressed his commitment to the security of the country.

He also said his government will engage in serious negotiations with the United States and China in order to resolve the conflict involving the deployment of the U.S. antiballistic missile system.

After the Terminal High Altitude Area Defense, or Thaad, was deployed to Korea to protect against a potential attack by the North, Beijing argued that the system’s powerful radar could be used by Washington to monitor its airspace. China subsequently levied unofficial sanctions on the South.

Moon also vowed not to be an authoritative leader and to communicate with the public at all times. He also said the opposition parties will be treated as partners of his administration with whom he will regularly consult. Talented people will be appointed to key posts without consideration of their regional backgrounds, he said.