Tip of the Gangwon spear returns

Tip of the Gangwon spear returns 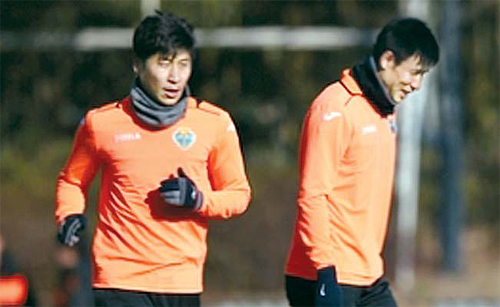 From left, Lee Keung-ho and Jung Jo-gook run around the soccer field during off-season training in Ulsan in January. [GANGWON FC]

After missing six games, Jung Jo-gook, striker for Gangwon FC, will finally make his return to the K-League this weekend against Daegu FC at Alpensia Ski Jumping Center in Gangwon.

Prior to joining Gangwon, Jung played for Gwangju FC, where he scored 20 goals throughout the season, winning the MVP award and the scoring title. Based on his success in the previous season, Jung was expected to lead Gangwon to the top of the K-League Classic. But so far in the season, he is not living up to this expectation.

While Gangwon played against Ulsan Hyundai on April 2, Jung injured his ankle and since then, he hasn’t made an appearance on the field.

Gangwon has also been struggling, ranking ninth in the league with three wins, three ties and four losses at 12 points.

Prior to the start of the season, Gangwon received attention from other teams as they successfully added big players Lee Keun-ho, Hwang Jin-sung and Jung to the team - key players who just got promoted to the K-League Classic this season.

With their new squad, they set a goal to advance to the Asian Football Confederation (AFC) Champions League, which is only possible if the team finishes third at the end of the season.

They got as high as fifth in the standing in the beginning of the season, but after Jung’s injury, they started to fall.

“At this point in the season, our team had to be ranked higher than it is now,” Jung said. “If we were, Gangwon’s soccer fever would have been stronger than any other season. Part of it is my fault.”

Although Jung showed regret for the team’s poor performance, he also showed a determination to bring the team back from the edge.

Jung’s return has been welcomed by all his teammates. Lee Keung-ho and Choi Yun-kyum, manager of Gangwon, are the happiest.

“We got weaker in our offense when Jo-gook left, which is one of the reasons why our team has been struggling” Choi said. “With his return, we can come up with different offensive strategies. His return is a great confidence booster for our team.”

While Jung was absent, it was Lee who was in charge of Gangwon’s offense. The two were Gangwon’s top offensive players, but alone, Lee faltered. It is not an exaggeration to say Lee led the entire team’s offense in Jung’s absence.

He may not have been able to score a goal, but his contribution was immeasurable. Because of Lee, Gangwon was able to avoid the bottom standing in the K-League.

“There is a big difference from when Jung played,” Lee said after Jung’s injury. “I do feel overwhelmed, but until he returns, I told myself to last.”

“Lee played really hard in each game and I could see that,” Jung said. “I am thankful for Lee, but at the same time, I felt bad that I couldn’t play with him.”